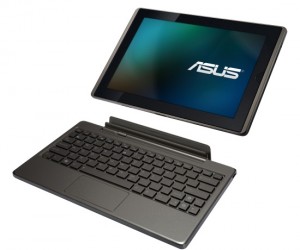 While the WiFi-only version of the Asus Eee Pad Transformer Android Honeycomb tablet was popular due to its more affordable price tag while retaining the high-end features of a 1280 X 800 display, dual-core CPU, and convertible hybrid form factor that allowed the tablet to be converted to a laptop, the 3G version of the tablet may not be as competitively priced. The base 16 GB 3G model of the Eee Pad Transformer is priced at $710 while the 32 GB model with the same 3G mobile broadband radio will be priced at approximately $850, or 499 and 599 euros respectively.

Pricing the the 3G editions of the Android Honeycomb tablet are a bit higher than the comparable Apple iPad 2, which starts at $630 for the 16 GB 3G model and $730 for the 32 GB 3G model.

The Eee Pad Transformer’s low $399 starting price for the WiFi-only 16 GB model gave it a leg up in the tablet race against Android competitors and also the iPad. However, with a $710 premium pricing, the tablet is approaching the price of the Motorola Xoom tablet, which debuted with a 3G radio that could be upgraded for free to 4G LTE on Verizon Wireless, at $800.

Though pricing was revealed, the availability of the 3G Transformer is still unknown, though it has been speculated to be available in August sometime.