iOS 7 has been out for over a week now, and it’s the fastest-growing software update in history as far as the number of users is concerned; 200 million iOS users updated to iOS 7 in a weekend’s time, according to Apple. It’s easy to see why: tons of new features and completely new look that refreshes iOS and provides something different. It’s the first major redesign of iOS since its initial launch way back in 2007.

One of the newer features that has come with iOS recently is the ability to seamlessly integrate social accounts with iOS. iOS has come with social media integration in past updates, but iOS 7 includes even more options. You can add a Twitter account, Facebook account, and Flickr and Vimeo accounts for the first time. Here’s how to add them to iOS for seamless integration. 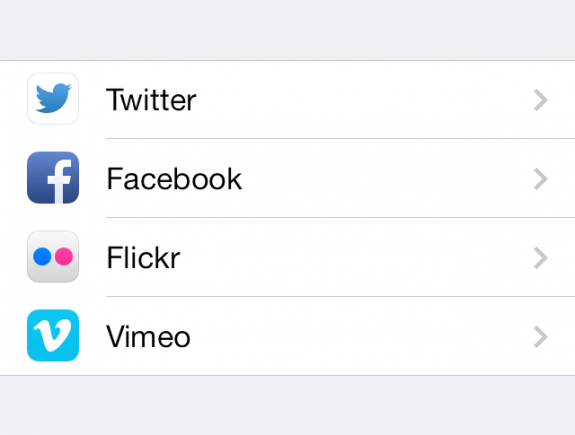 Once you’ve added an account, you can also set which apps have access to the account that you just added. These show up at the bottom of the page where you added an account, but the app list won’t show up until you’ve open up an app that access your accounts.

Why Would I Want to Enable This?

There are a variety of reasons for adding social accounts to iOS. For instance, it makes it easier to log into third-party social apps, because the app will simply ask if it can use your social account that you already added in Settings, that way you don’t have to type in your credentials again.

Furthermore, adding social accounts to iOS makes it a lot easier to share photos and video on your social network of choice right from the Photos app. All you have to do is select a photo or video that you want to share and tap on the social network that you want to share it to. If you have a social account already linked through iOS, you won’t have to bother with signing in every time, and you’ll just have to tap on “Share” to finalize it.