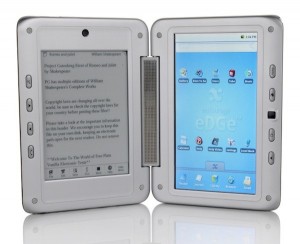 Go figure. The dual screen Entourage Edge Tablet/Slate made a debut on the Home Shopping Network. Well, at least the smaller version has. (6 inch e-Ink that is pen-enabled from Wacom and a 7 inch resistive display for its Android half). Called the Pocket Edge, it is also available for pre-order on Amazon for $399. This curious Tablet/Slate remains in the curious category and I’ll be interested to see what users say once they get their hands on one of the devices. Word was that we’d see these at Verizon, but there’s no new news on that front yet, but then they are probably busy with those bigger name slates they’re putting on sale.