Not only are developers tackling tablets, but they are also tackling games on touchscreen devices in a  big way according to a recent survey (PDF download link). EraThink is hoping to combine the two in a portable form factor with its EraPalm device, which will compete with devices like the Razor Switchblade concept and the Sony Ericsson XPERIA Play, which had been dubbed as the PlayStation phone before the device was formally unveilled at Mobile World Congress last month. 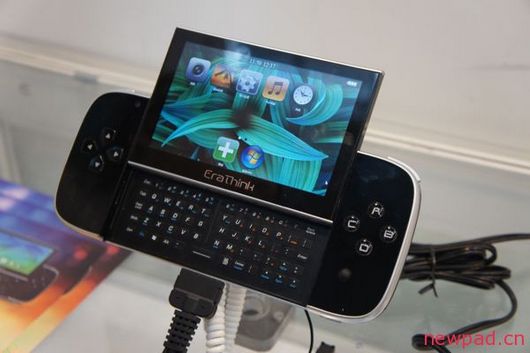 Unlike the XPERIA Play and like the Switchblade, the EraPalm will run Microsoft’s desktop-class Windows 7 operating system. The device has a hardware design reminiscent of the Sidekick with a 5-inch display that slides up to reveal a full keyboard. Flanking the sides–in landscape orientation–are gaming controls. Like the Razor concept, the EraPalm will utilize an Intel Atom processor.

The EraPalm will come with USB, VGA, and HDMI ports, Ethernet support, and 3G connectivity. No details were given on battery life. Given the Intel Atom CPU, which is netbook-grade, you probably would want to stay away from serious 3D games on this mobile Windows 7 device.

Here’s a video of the Razor Switchblade: