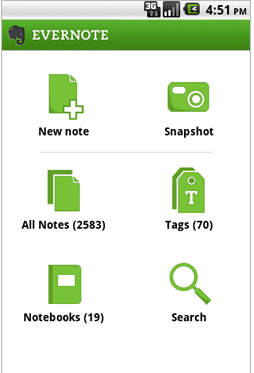 Evernote for Android received a well needed update today, bumping up to Evernote 2.0. The new version of Android is a big update to the Android version of Evernote which has been functional, but somewhat stale for a while now. The update isn’t just cosmetic, though you’ll notice the improved homescreen right away; it also brings about faster performance and better integration with the Android platform.

The new homescreen gives you quicker access to the information you need with quick access to a new note, new snapshot or to dive into your old notes, tags or notebooks with prominent icons. There’s also a search option on the homscreen which is moved to the upper right corner when you are in a note.

While looking through your notes you can browse by notebooks in a “stacked style” view. The biggest changes to the view comes when you are looking at a single note. Simply tap “More notes” and a small display of thumbnails will show up in the bottom of the note. You can swipe left or right to view your other notes without leaving to the main screen. 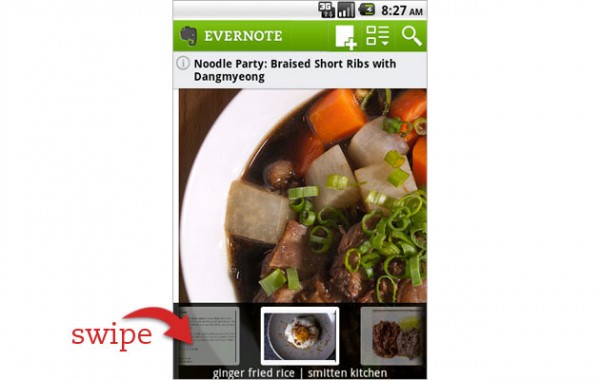 The new note creation interface isn’t just quicker to get to, it makes it easier to add attachments including pictures, audio, video or a file. Another cool new feature is that you can record audio while taking notes. This is great for when you are trying to take down notes and the speaker is talking too fast or if you just want an easier way to leave yourself a voice note on the go.

In addition to adding attachments we found that viewing notes with attachments, such as a PDF, was improved in Evernote 2.0 on our test Droid. 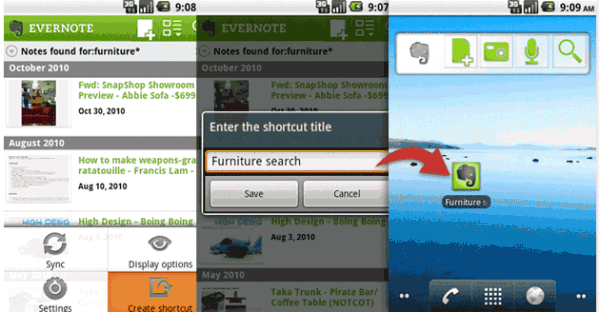 Evernote 2.0 is much more integrated with the Android OS. If you are running Android 2.1 the built in Google Search widget will now search Evernote notes. You can also use the updated Evernote widget for fast access to Evernote. Finally, you can now add shortcuts to your Android homescreen which will take you directly to a note, tag or notebook. This is an easy way to quickly get back to a note you are constantly updating or a notebook you need to reference a lot.

The newer version of Evernote for Android is a big step up and one I wish I had access to while using evernote to compose a best man speech over the past few months. While the old version was got the job done, I found mysef constantly emailing notes to myself rather than opening the app since it took too long to get from having an idea to typing it out. With the new shortcuts I could have had fast access to my speech to add bits of insight I gathered at odd times over the months leading up to the wedding or I could have recorded an audio note much faster.