Evernote 4.0 for Android has launched today bringing a brand new user interface, some new features and some improvements to older ones along with it.

In a blog post, Evernote has detailed the Android update which should stand to greatly improve the productivity application. Version 4.0 overhauls the application completely. In fact, every single screen within the application has been changed.

Starting with the home screen, the new home screen in Evernote 4.0 now combines all of the familiar note taking options with a series of buttons that allows into features like notebooks and tags. Evernote has also made the home screen easily accessible. Users only have to swipe to the right or tap the elephant in order to get back to get back home.

From the home screen, a swipe left will now take users to a note list.

In fact, swiping gestures are now found throughout the application. From within places like notebooks or tags, users can now use horizontal swipes to move from one category to another. 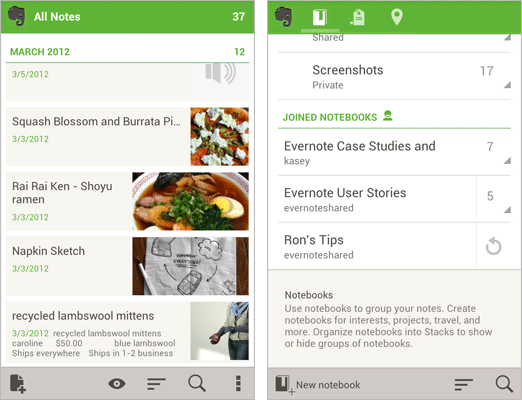 Evernote has also changed up both the note and notebook features of the app. The look of the note list has been redesigned and the notebook list now has a single view for local lists and ones that others have shared.

Other UI changes include new action bars which are housed along the bottom of the app and allow users to easily edit, share, and tag notes. Navigation on notes also now fades away when users start scrolling. A simple tap makes them return. 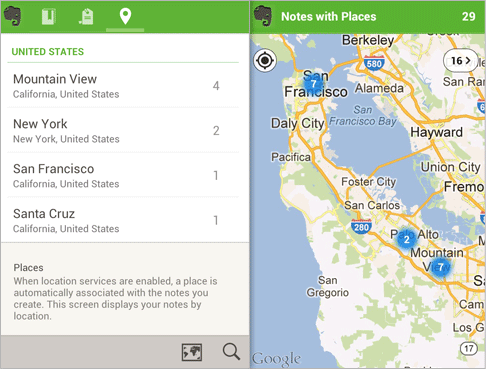 Evernote has also added a new feature called Places in which the app will mark a note with the place that it was made, assuming location services are enabled. From the Action Bar, users will then be able to see where they made the note on a map.

The update is also loaded with fixes for several bugs and performance issues as most major app updates are.

This update comes on the heels of Evernote’s purchase of digital inking app Penultimate.

Evernote CEO Phil Libin has promised tight integration between his app and his company’s new acquisition.