A major new update for Evernote for Windows has been announced, and its cup is spilling over with improvements. I’ve been playing around with a preview version for a couple of days. Haven’t gotten to all the new stuff yet, but I like what I’m seeing so far.

Full list of improvements is below. Official announcement on the Evernote Blogcast. Most of it is small things and general enhancements, like faster performance. The big change was a full recode of the application from scratch. Generally, the interface is much the same as Evernote 3.5, so there’s not much re-learning involved. The streamlined top menus are a big lure for me. I loaded the preview on my TEGA v2 and was pleasantly surprised by how good it looks. 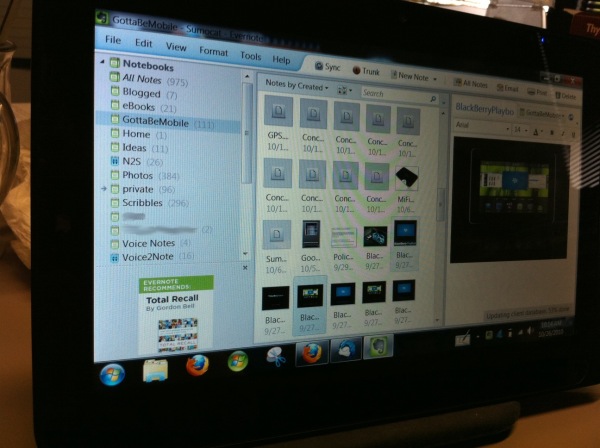 The geotagging system could be great for mobile usage, tagging notes with your location while on-the-go. Unfortunately, it requires GPS hardware, something even most mobile PCs don’t have, and I believe Wi-Fi triangulation requires some sort of hardware enabling or service, such as Skyhook. An external solution, such as GPS USB plug-in or Bluetooth connection to a smartphone, might also work. The spirit is willing but the flesh is weak.

I was hoping geo-location meant I could view Evernote notes by location on a map in Windows, as I can on my iPhone, but that hasn’t been implemented. Another disappointment is that the Windows drag gesture does not work on the left-hand notebook panel or the Trunk sub-window, forcing me to use the scrollbar – ugh. Works fine in the other two main panels. Finally, the interface looks great in landscape mode, but it really doesn’t work in portrait. Would be nice if the panels would stack vertically in portrait, but I’m not sure how that would be detected and implemented in Windows. See my suggestion for Urbanspoon on iPad for a basic visual.

Those quirks aside, the new interface is very attractive. Not entirely touch-friendly, but it works better on a small screen than the previous interface and the middle panel is easy to toss around via the drag gesture. Wouldn’t call it a game-changer but it’s worth the update.