T-Mobile has announced that it will be hosting a one day sale in honor of Valentine’s Day and that sale will begin on February 11th and see the carrier offer up its entire 4G smartphone lineup for free. In addition, the carrier will also be offering up select tablets for free.

Of course, in the world of smartphones, free doesn’t actually mean free and in order to take advantage of the offer, you’ll have to sign up for a new contract. Luckily, for those of you interested, T-Mobile has some of the cheapest data plans in the land and it also has some quality devices for sale as well.

And yes, the carrier will be offering up both its Classic and Value data plans for use with the devices.

So what kinds of devices does T-Mobile have on its network? In our opinion, there are a couple of standouts that you should probably have on your radar should you be debating this offer. 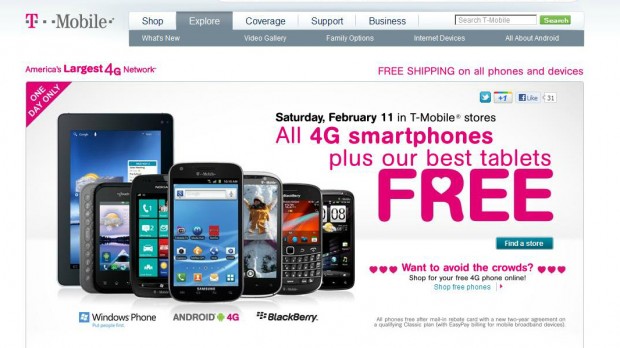 One, the Samsung Galaxy S II. We feel like it’s still one of the five best Android smartphones on the market and it should be able to handle just about anything thrown at it. If your preference is an Android from HTC, then you may want to look at T-Mobile’s HTC Amaze 4G.

Or, if Android isn’t your cup of tea, you might want to check out either the Nokia Lumia 710 or the HTC Radar 4G. Both are extremely capable and both are powered by Microsoft’s Windows Phone 7.5 Mango operating system.

If you’re more of a BlackBerry type of person, the BlackBerry Bold 9900 4G is also available to suit your needs.

Obviously, those are just a few of the phones that T-Mobile will be offering up for free.

In addition to the phones, the magenta carrier will also be putting it’s T-Mobile Springboard tablet on sale for free. So, if you’re in the need for an Android tablet, this might be one to look at.

Before you get out of here, we should let you know there are a few caveats besides the fact that you’ll need to sign a contract.

In addition, it appears that in order to get the Galaxy S II or the HTC Amaze 4G, you’ll have to sign up for a 5GB data plan.

The deal will be honored at participating T-Mobile retail stores across the United States and will also be available through select third-party retailers.

Also, you’ll want to keep in mind that T-Mobile’s 4G network is not 4G LTE, meaning, it’s not the same as the 4G advertised by AT&T and Verizon. T-Mobile employs several different types of HSPA+ with the two most prominent being HSPA+ 42 and HSPA+ 21.

Those numbers refer to the theoretical speeds that its devices can hit.

And while T-Mobile’s network is fast, it’s not going to offer the same speeds that LTE offers. But then again, the phones on HSPA+ don’t suffer from the same battery life problems that LTE devices have.