Facebook has announced a new extension to Facebook chat for mobile devices called Facebook Messenger that is a stand-alone app that will be available today for both the iPhone and Android. The roots of Facebook’s new application come from its purchase of the messaging app, Beluga, earlier this year.

Again, this is a separate app that will be available on both the Android Market and iTunes App Store later on today and is aimed at those of you who are constantly using Facebook chat on your mobile device.

I absolutely hate how it works so that’s why I am intrigued by Messenger. Those of you who have been using Google+’s Huddle feature will probably be interested in this as well. 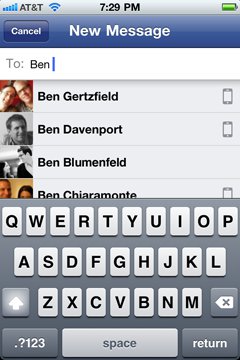 Messages sent through Messenger are delivered through text or notification which means your buddies will get them faster than ever before. You can also send messages to both your friends or phone contacts just by typing in their name. It’s all about simplicity here folks.

You can also start group chat sessions to make planning things with your loved ones a whole lot easier. You can even add your location or photos to the conversation for even more clairity. Also, as Facebook points out:

The Messenger app is an extension of Facebook messages, so all your conversations are in one place, including your texts, chats, emails and messages. Whether you’re on your phone or on the web, you can see the full history of all your messages.

Again, it’ll be available on the Android Market and App Store later on today.