Google is re-igniting its war with Facebook, but this time the war is fought much closer to home on the Android home front. With the recently deployed Android 2.3 Gingerbread over the air update to rectify some of the Nexus S‘s many problems, Google is removing the Facebook contacts synchronization feature that would allow Android users to merge their Facebook address book onto their Android smartphone, claiming that Facebook is violating the Android terms of service.

The feature, implemented similar to Palm’s Synergy engine on webOS, allows users to view their Facebook friends’ contact information next to their Android contacts, SIM card address books, and Google contacts. However, as Facebook’s information isn’t downloaded locally onto the Android handset but is stored instead on the cloud, Google claims that this creates the false appearance that contact lists from Facebook could be ported to another device. Google’s official statement is as follows:

“We believe it is very important that users are able to control their data. So in the over-the-air update for Nexus S, we have a small change to how Facebook contacts appear on the device. For Nexus S users who downloaded the Facebook app from Android Market, Facebook contacts will no longer appear to be integrated with the Android Contacts app. Since Facebook contacts cannot be exported from the device, the appearance of integration created a false sense of data portability. Facebook contact data will continue to appear within the Facebook app. Like all developers on Android, Facebook is free to use the Android contacts API to truly integrate contacts on the device, which would allow users to have more control over their data. We are removing the special-case handling of Facebook contacts on Nexus S and future lead devices. We continue to believe that reciprocity (the expectation that if information can be imported into a service it should be able to be exported) is an important step toward creating a world of true data liberation — and encourage other websites and app developers to allow users to export their contacts as well.” 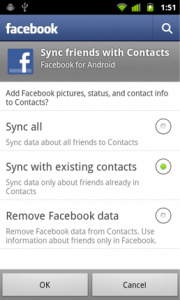 Google, however, isn’t taking a hard line approach on this issue, which may cause confusions and problems on its own. According to the Android OS-maker, the new approach will apply only to the “Nexus S and future lead devices.” It’s unclear if that applies to future Google-branded hardware in the Nexus family, or if it applies to flagship devices–like the Motorola Xoom tablet. Whatever the case, the wishy-washy nature of Google’s approach, which may spare some Android users the pain of losing Facebook contacts integration, may cause further fragmentation in the Android platform down the road as some devices will support this ‘legacy’ feature while some future devices may ban Facebook contacts synchronization.

Android users, particularly Nexus S users to which Google is targeting, can still access their Facebook contacts on their mobile handsets. Rather than having all that data integrated via Android’s address book, users must now go through their Facebook app for Android to get the contact data.