While a cryptic media invitation may lead many to believe that Facebook is developing some Android-centric experiences for Google’s Android platform, the latest report suggests that the social network giant will be releasing its own Android-based smartphone come Thursday called ‘Facebook Home.’ The Facebook Home will be unveiled at an event where Facebook says, ‘come see our new home on Android.’

According to llabtoofer, the phone will be–as previous reports have speculated–developed in close collaboration with HTC. The phone has a code name of HTC Opera, which is now known internally as the HTC Myst. 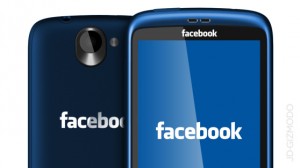 HTC, no stranger to Android, has made a name for itself early on by building its own customized user interface as an overlay layer on top of Google’s Android OS. By beautifully skinning the Android OS with its own HTC Sense UI, HTC may be a natural partner for Facebook, which is seeking to accomplish the same thing.

The New York Times reports that Facebook is in fact working on its own phone, and that the Android experience on this new Facebook Home smartphone would be completely  re-tooled to fit Facebook’s purpose, much like how Amazon’s skinning of Android on its Kindle Fire tablet leaves little traces of Android visible to the end-user. “So it was almost inevitable that Facebook would introduce a smartphone that put its social network front and center,” writes the Times.

The software is designed so that some of the core features of the phone, like the camera, will be built around Facebook’s services, according to one of the people, who is a Facebook employee. Both people briefed on Facebook’s plans spoke on the condition of anonymity because they were not authorized to discuss the product before the formal announcement.

And more recently, leaked specs for the HTC Myst suggests that the smartphone will be a mid-range handset with a dual-core CPU.

However, according to a conflicting report on the Wall Street Journal, Facebook is merely working on a specialized home screen that will update a user to all the news feeds, status updates, photo posts, and comments posted to Facebook, and the social network giant won’t be developing its own phone. Sounds a lot like HTC’s new Blink Feed, a specialized home screen UI created for the new HTC Sense on the flagship HTC One, doesn’t it? The WSJ report suggests that Facebook is merely working on software and a home screen UI that could help Google sell even more Android phones rather than building its own branded phone.

Also reported by these two huge publications is the fact that Facebook will make its camera and messaging applications the default app on Android. It’s unclear if this will mean that Facebook will push a renewed focus on its Facebook messaging app. The social network had attempted to make its messaging hub the center communications hubs for users as it dedicated vanity URLs and a custom @facebook.com email address to users.

This isn’t the first time that HTC and Facebook are partnering. A Facebook-centric phone was created in the past for AT&T called the HTC Status, that was based on Android and attempted to make it easier for users to share to Facebook.

The announcement is scheduled for the morning of February 4th, and we’ll update you with details as we find out.