Facebook users that mostly use mobile apps to access the social network should start seeing a new layout today.

The new layout reduces the amount of white space by making photos in the news feed three times larger than they were before. The new design also separates individual status updates and photos by placing them all on a grey-blue background. The result is a more attractive layout that should make the app more enjoyable.

The social network announced a new layout that is starting to roll out across the iOS and Android apps as well as m.facebook.com. The new layout is rolling out slowly at first, those who mostly use the mobile apps to connect to Facebook will see the new layout first, and others will see it soon after. 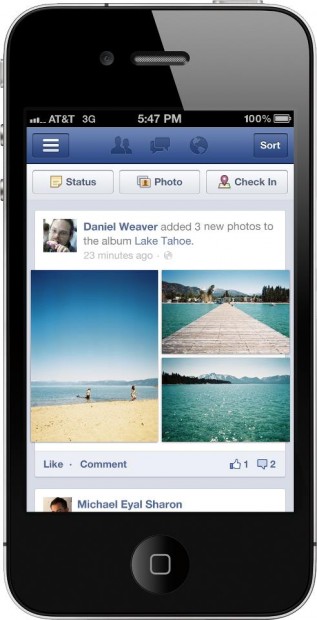 Strangely, the new Facebook news feed layout looks very similar to the new layout of Google+ that hit the iPhone last week. Unlike Google+, however, everything else in the Facebook mobile app will stay the same. The new layout doesn’t require an app update, which lets Facebook stagger the rollout. By updating its app, Google+ pushed its new design to every iPhone user at once.

Because the new layout doesn’t come with an app update, it won’t fix any of our problems with the app. That means the app can still make every picture into a picture of Mark Zuckerberg. It also means the iPad app is still as bad as ever. The new layout looks great, but we’d also like a more stable app.

Maybe then we won’t have to resort to third-party Facebook apps.