Earlier today, we had reported that Facebook would be updating its app to bring the iOS and Android version closer together visually. This morning, though Facebook did confirm that the app would be forthcoming, the app itself wasn’t available for update. Now, at the end of the day, the update is now found in Android Market. 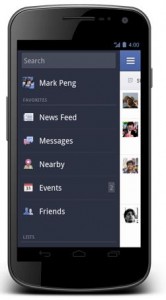 Users who already own the app can head on over to Android Market to update the app for free. Users who have never downloaded the Facebook app can get it as a free download from Android Market by searching for Facebook.

Once updated, Facebook provides a quick tutorial on what’s new with the app. Users get a new navigation pane, as we’ve mentioned this morning, as well as the ability to quickly search for whatever they need in Facebook without having to leave whatever page view they’re currently on. U.S. Android users will mostly benefit from this feature as many international Android handsets do not come with a capacitive touch search button, but if your smartphone has this, all you need to do is hit search and you can go on to find what you’re looking for. You can also find an easy way to search by hitting the left drop down menu option, where search is conveniently located at the top of the list.