If there’s anything we can learn from the top iPhone game chart it’s that iPhone owners are jealous of the pattern unlock screen available on Android phones.

Lock My Screen, a paid fake iphone lockscreen app that claims to “create specialized unlock screens that increase security”, is the number 5 top paid app for the iPhone.

The app advertises the “best pattern code Security system for less than your morning coffee.” But, as buyers quickly found out, the app offers no security for the iPhone. Despite promises to keep user data private and secure, the Lock My Screen iPhone app only provides 20 backgrounds that users can set as their lock screen wallpaper to give the illusion of security.

iPhone users that read further down the description, they discovered that the app includes over 20 wallpapers that look like security, three of which you can see in the image below. 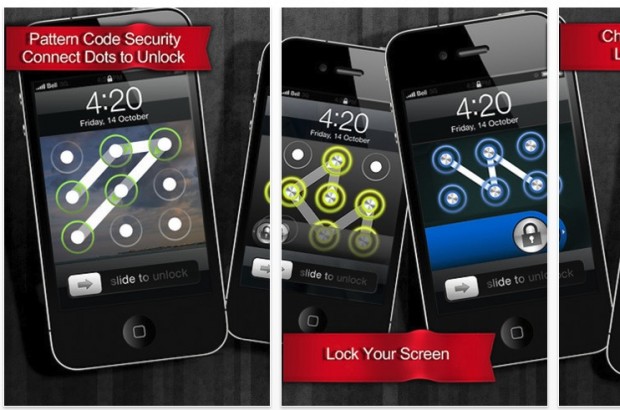 The developer posts a disclaimer at the bottom of the app description,

Disclaimer* Security is provided by the illusion of an impenetrable locked screen. The app does not actually lock your screen nor provide new unlock features. It is meant to only give the perception of security against the meddlesome scumpling and is not a real security system for your device. 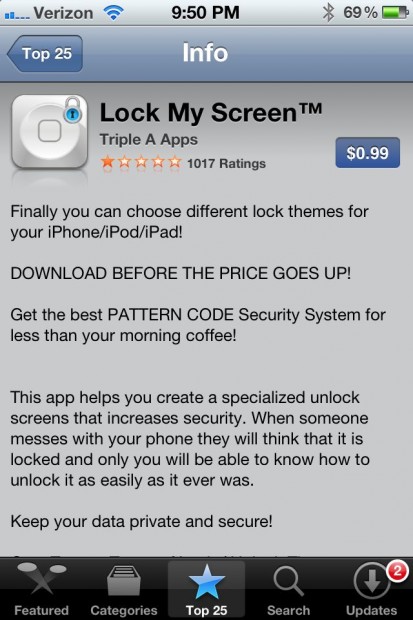 Lock My Screen has 1,057 ratings, with 1,000 one star ratings and angry reviews. The app sold for 99 cents before the price jumped to $1.99 today and the developer updated the description to put a disclaimer at the top.

The screenshot to the right shows the original description providing users with a tempting download description, though the one star overall rating was a tip-off.

Check out some of the angry reviews from users who thought they were purchasing a real lock screen application:

Money in the Bank

In order to spend multiple days in the top paid apps, Lock My Screen likely sold hundreds of copies per day. Combined with the 1,057 reviews, it’s easy to imagine that Fabio Junior, the developer of Lock My Screen, collected thousands of dollars with a deceptive app.

All by putting together a simple wallpaper pack app that tricks users.

We often write about malware on the Android marketplace, praising Apple for keeping dishonest apps out of the app store, but this time Apple has failed. If Apple app reviewers can find the time to ban apps that change hair color from blonde to brown and keep OnLive out of the app store they need to prevent apps with misleading descriptions.

No Lock Screen Apps for iPhone

Users should not buy any lock screen apps for the iPhone without understanding that they are all wallpaper apps. Apple does not allow developers to create apps that change the lockscreen of the iPhone.

The only way users can modify the lock screen is to jailbreak the iPhone 4S and other iPhones. There are apps that allow users of jailbroken iPhones to change the lockscreen, but there is no iPhone 4S jailbreak for iOS 5.1 yet.

How to Get a Refund on Bad Apps

Officially Apple does not offer refunds for apps, but I have had success emailing Apple support and requesting a refund for app purchases that went bad.

To request a refund for Lock My Screen or another iPhone app, users need to login to iTunes on their computer.

Click on the username in the upper right and then choose Purchase History.

Choose the app purchase, and then click on the Report a Problem link to the right of the screen.

Explain clearly and calmly why you need a refund. Avoid anger and profanity.

Have you been tricked by this app or another paid app on the iPhone?