Months after it first arrived on iOS, Fieldrunners 2 is finally coming to Android devices next week.

Fieldrunners 2 will arrive in the Google Play Store on Wednesday, April 24 for Android devices. The tower defense game first arrived on iOS last July, a full nine months ago. The game is also already available on Steam for the PC.

Developers Subatmoic Studios says their experience with the Android release of the first Fieldrunners gave them the experience needed to make the new game “rock solid.” The long delay between the iOS and Android releases of the game are likely because the team built a new engine for the sequel, which took more time to port over to Android. 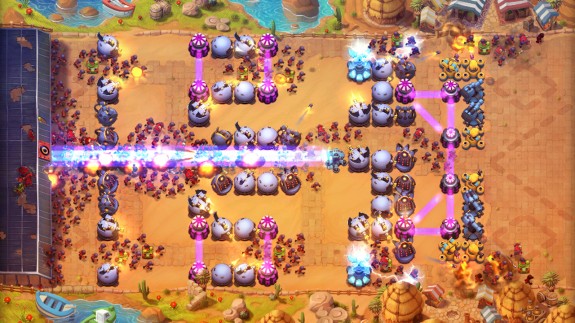 The sequel to Fieldrunners features the same tower defense gameplay as the original game, but it adds a few new quirks to the game’s formula. The new game incorporates trenches, bridges and tunnels for enemy units to travel through. Players can’t build towers in any of those structures, forcing them to think about battles in a different way.

There is no Android-specific content for Fieldrunners 2, but the game is long enough to occupy most gamers.

Fieldrunners 2 features a 20+ hour single-player campaign, so it can occupy mobile gamers for several months unless they decide to play through in marathon sessions. If gamers ever get bored with the campaign the game also offers time trial, sudden death and puzzle maps, each with their own objectives to fulfill.

There is no announcement on the price of Fieldrunners 2 for Android, but the iPhone version sells for $2.99 while Fieldrunners 2 HD for iPad costs $4.99.

With the Android release coming next week Subatomic Games will now focus on releasing a new update to the iOS version of the game. There’s no word on what that update will include, but updates to the first version of the game typically added new content for free.