A new phone from Yota Devices is one of the first phones to use both a LCD and E-Ink display.

The YotaPhone uses two 4.3-inch displays, a LCD display on one side, and an E-Ink display on the other. The YotaPhone runs Android 4.2 Jelly Bean and uses a dual-core 1.5GHz Snapdragon processor which powers both displays. The LCD display shows what looks like stock Android and will handle most apps.

The second, E-Ink display can show customized information such as the time, date, weather, notes, and reminders. Users can also use the touchscreen for apps, particularly for apps that don’t require a lot of motion. E-Ink is a great way to read ebooks or magazines, and with the YotaPhone that may soon be a possibility on a smartphone. 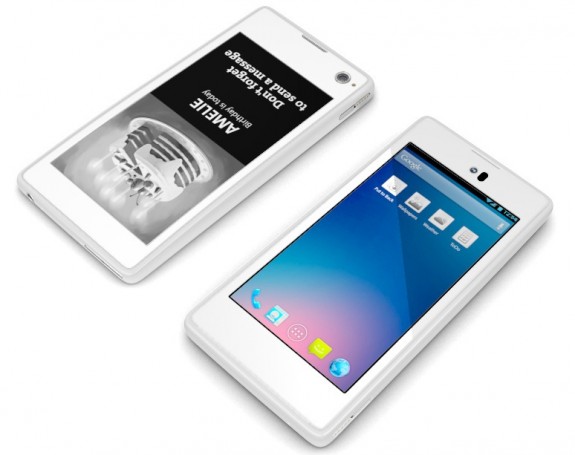 Yota Devices has an SDK available for the YotaPhone so developers can take advantage of both displays. The phone will release worldwide in the second half of 2013, so developers have a lot of time to think of ways to use the second display, if they choose to at all.

The E-Ink display uses a gesture area for controls as well as gestures in “extended capacitive areas” elsewhere on the phone.

The YotaPhone is a multi-band 4G LTE phone which Yota Devices claims will work anywhere in the world. Unfortunately, the 4G LTE bands it does support aren’t used by any U.S. carriers. The phone should still work on 3G bands in the U.S..

The YotaPhone also features either 32GB or 64GB of internal storage depending on the model, a 12MP rear-facing camera, and a front-facing HD camera.

The YotaPhone isn’t the first dual-screen phone, nor is it the first E-Ink phone, but it is the first phone to combine the two ideas. The closest device to the YotaPhone so far is the PopSlate case which adds an E-Ink display to iPhone.

Yota Devices will formally announce the YotaPhone at Mobile World Congress in February 2013.