Last night, Verizon released the first advertisement for its latest Droid-branded smartphone, the 5-inch Droid DNA. The commercial has all the charactertistics we’ve come to expect from ads promoting Droid devices. Robots, an ominous voice, no dialogue, and a setting in the future, all of which have been used to sell Verizon’s devices to consumers. Problem is, Verizon left out the Droid DNA’s biggest selling point of all in the device’s first advertisement.

The Droid DNA’s first commercial starts off as you might expect. A guy is strapped to a chair and futuristic doctor-looking people attach a Droid DNA to some device that seems to inject the power of the phone into his, you guessed it, DNA.

The patient then starts gaining some of the Droid DNA’s features, as noted by a voice off-screen. First, his neural speeds are increased to 4G LTE data speeds. Verizon boasts the largest 4G LTE network in the land with over 400 markets across the United States so it’s no surprise that it would tout the speed of the Droid DNA in this ad.

Next, the patient’s brain is upgraded to a quad-core processor. The Droid DNA sports a 1.5GHz Quad-core Qualcomm Snapdragon S4 Pro Processor, one of the best smartphone processors that money can buy.

Lastly, the patient is upgraded with predictive intelligence with Google Now, Google’s predictive feature that is included with Android 4.1 Jelly Bean, the on-board operating system on the Droid DNA. 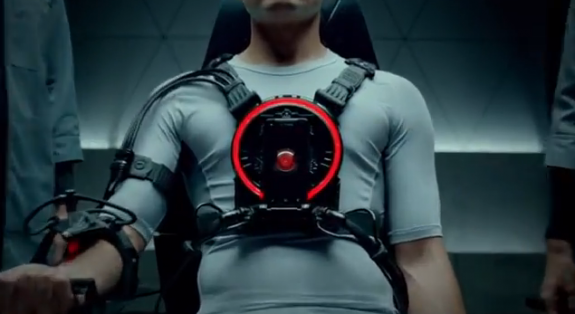 Apparently, Verizon didn’t think this guy would want the powers of 1080p resolution. Or the public for that matter.

Personally though, if I were the patient, I would have been a little ticked off if those were the only superpowers that the medical team extracted from the Droid DNA. That’s because they, and Verizon, left out maybe the biggest feature of them all.

The Droid DNA is equipped with a large 5-inch display. Only, its display isn’t like any other that has hit the market in the United States. The Droid DNA possesses a full HD 1080p display that offers 440 pixels-per-inch. It’s arguably better than any other smartphone display on the market but apparently, Verizon doesn’t think it’s a selling point to consumers in this reality let alone a feature that someone allowing his DNA strand to be altered would want.

I realize that yes, it will likely release more advertisements for the Droid DNA which will surely promote the 1080p resolution of the Droid DNA’s display. But you would think that given the amount of competition out there in the iPhone 5, Galaxy Note 2, Galaxy S3 and more, HTC and Verizon would want to start with a bang, promoting unique features and not features that have been out on Android devices for months now.

Here’s to hoping the medical team brings that poor guy back in for a second procedure.