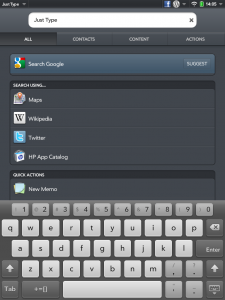 I’m a few days into testing out the HP TouchPad and it has its pluses and minuses. This post lists some reasons that I would avoid making a purchase at this point and is meant to accompany a post that will follow with some reasons why you might want to think about making this your next Tablet purchase. Schizophrenic? Possibly, but with the possible exception of the iPad, there isn’t a mature touch Tablet platform out there. They all offer promise, but promises aren’t hard an fast in this crazy mobile tech world we live in. So, here are five reasons to avoid the HP TouchPad.

It feels cheaply made.

At least to me it feels cheaply made and not well thought out. I’m not a fan of the plastic Tablet form factor. I’m certainly not a fan of plastic form factors where buttons feel like they aren’t secured properly. That’s the case with the volume rocker switch. On the unit I purchased it feels like it slides side to side and isn’t well seated. HP has a nice sounding sound system with the Beats Audio System. You can actually hear stereo sound through the two speakers. Except…. except when you have the device sitting in landscape mode (horizontally) in a stand with the speakers pointed up. Why is this a problem? Well the volume rocker rests in the stand if you’re not careful and too easily turns itself down or off if you touch the display. Sloppy.

I find that one of HP’s first reactions to the spate of negative and mixed negative reviews it received was that the TouchPad wasn’t aimed at consumers but instead aimed at the pot of gold that is the Enterprise. Where have we heard that one before? I’m not sure Enterprise users will be happy with the build quality I’m seeing. Also related here, I spent a lot of time out doors on my porch this weekend in hot and muggy conditions. The plastic case combined with my sweaty palms had me constantly feeling like the device was going to slip out of my hand. I could chalk that up to the weather conditions, but this was also true when I was indoors with just the slightest bit of moisture on my hands. The glossy black case is not only designed for slipping and sliding but for hanging on to more fingerprints and smudges than an FBI database. Again, (and this isn’t just HP) why come up with a device that is made to be handled with your hands and then slap a finish on it that essentially destroys what beauty you’ve put into the design three minutes out of the box? Unless you’ve got the cleaning cloth concession this just makes no sense for the consumer market or the Enterprise market.

Look, I have to applaud HP for making the investment it did when it purchased Palm and decided to go full steam ahead with webOS for its Tablets, smartphones, and according to them, other devices as well. Had HP stuck with it’s traditional model and only tried to create a Windows 7 Tablet, well, you know what would have happened, because it did with the Slate 500. This was not just a big investment, but a big break with the past given HP and Microsoft’s long standing relationship. Don’t get me wrong, we’ll see plenty of HP and Microsoft equipped PCs in the future, but as for mobile, HP knew it needed a new direction and put its money down to go there. So, credit where credit is due. At least until the bill needs to get paid. All of that said, to criticize HP for not having a large number of Apps ready for the TouchPad launch is both valid and also stating the obvious. HP’s bet isn’t for just a Tablet, it’s for creating an ecosytem. Admittedly, HP is building on the webOS ecosystem that never caught fire when it was under Palm’s control. So, it is accurate to say there aren’t enough Apps. HP claims 300 TouchPad Apps at launch. That puts them in good company with another iPad also-ran, Android. According to AndroidCentral there are 292 Tablet optimized Android Apps available.

So, where is all that heading? As I’ve said before, it’s not quantity it’s the quality of Apps that are available. More specifically it is the quality of Apps that really take advantage of a touch Tablet experience. They just aren’t there  for the HP TouchPad yet in any numbers, or for that matter of any real quality. Yes, the webOS homebrew folks are gearing up, but unless you want to spend a lot of time in just the browser the TouchPad just can’t compete out of the box. Yet. But, if you take HP’s word for it that they are aiming for the Enterprise we’ll need to see some Enterprise quality Apps before they can make that push. I’ll give HP and QuickOffice credit here. The QuickOffice integration will allow you to edit documents and will also let you access files via Dropbox. The Android implementation of QuickOffice on the Samsung Galaxy Tab 10.1 running Honeycomb 3.1 only lets you view documents. HP needs to really work well with developers in a very public way if they want this webOS bet to have a chance of succeeding regardless of the market they are aiming for.

Let’s also look at what obviously was and is a major faux pax. When units went out to reviewers they included a Kindle App. TouchPads purchased in stores (and I assume online) have a link to said App on the device but it only yields a place holder screen and a promise (there’s that word again) to let us know when it is available. That’s not good on any front, and at the moment (unless I’m missing something) there isn’t a TouchPad optimized eBook reader in the HP App Store. Ouch!

As far as I’m concerned this is just unforgivable at this point in the game. If you’re going to launch a Tablet in today’s iPad dominated world, you better have the hardware and software combination optimized so that sluggish performance doesn’t result. That’s not the case here with the TouchPad and promises of fixing it in an update just don’t cut it when you are charging between $500 and $600 for the device. Delayed reactions to touching the screen, slow loading of Apps, the rate of reaction to action feels like an early Atom Netbook in many instances.

At first glance the virtual keyboard looks great. It has a full number row and the layout makes sense in landscape or portrait. But, boy, I get so many errant key presses that I begin to question my skills. A lot of those mistakes come when I’m typing keys adjacent to one another. I’m not alone on this one as I’ve seen quite a few complaints on this. Again, taking HP at its word about the Enterprise (I hope you can see the tongue I have planted firmly in my cheek when I keep repeating that), you’ve got to do better with a virtual keyboard on a touch Tablet. That’s just a given. 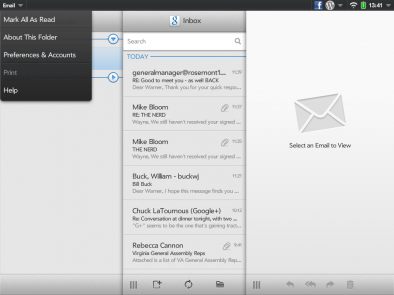 This is where the schizophrenia comes in. In the following article about things I like about the HP TouchPad you’ll see I list this as well. But there are things about it that drive me batty.   (UPDATE: So, ask and ye shall receive. A reader pointed out that the 2nd button on the left of the bottom of the screen will open up a new email. Huzzah. I tried it out. And it works. That said, the sluggishness of the system had let me to dismiss that button after pressing it previously when trying to send a new email. That also proved true in testing this out after receiving the reader comment. ) I’m also not a fan of the very structured way that Apps are stored or accessed. I’m not a fan of the web page bookmarking (or favorites) system either. These are just three examples and I’m sure I’ll highlight more as things go on. Again, I’ll also point to some UX experiences that I think are pretty good in my next post.

To say a Tablet or a Tablet OS was released “before it was ready” has sadly become more than a cliché these days. Unfortunately if you’re looking for an out of the box, ready to go, ready to compete touch Tablet experience, I can’t say I’d recommend the HP TouchPad just yet. I can’t say the same for most of the iPad competitors either (those that admit they are and those that don’t). If you believe the rumors, I’m not sure HP has the confidence in this first effort as a real competitor either. But then that’s the subject of posts yet to come.
Other posts in this series: