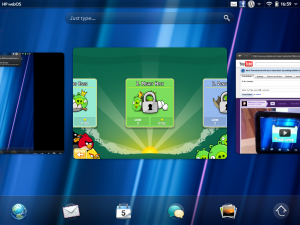 I posted a sister post that some might find schizophrenic to this one that contains Five Reasons to Avoid the HP TouchPad. Here, I’ll lay out some of the reasons I remain eternally optimistic about the webOS fueled TouchPad. (Although eternally is a long time in mobile tech years.) Before I get to those five reasons though, let me say that I do believe that webOS is a very real potential contender in the touch Tablet wars. You can feel the thought behind the OS and the user interaction in most cases. As I think you can surmise form the earlier post, it is the current execution that is lacking.

Let’s face it. There are iPad and Apple alternatives out there. Does HP deserve a place at the table? I think so. The TouchPad is certainly no worse off than what passes for Android Tablets with Honeycomb 3.1 these days. In fact, in my testing of both the Galaxy Tab 10.1 and the TouchPad, I’d say what is going on behind the curtain with the TouchPad is far superior than the slapdash feeling I get with Honeycomb 3.1. Am I routing for an underdog here? Yep. But I am only doing so because I think HP has the muscle to make webOS live up to its promise and (and that’s a big and) build an ecosystem that can compete. That requires a focus that I don’t think Google or Microsoft can offer given their multi-faceted structures, and RIM might as well just hang it up.  I think HP is up to the challenge and they’ve taken that big first step, even though it has proven in the early going to be a painful one. When it comes down to it, HP has to execute on a bold vision, and unfortunately that execution has to come when they are running the race far behind the market leader.

But on to my five reasons.

Although I never owned a Pre, I was always a fan of webOS. I still am. I was among many who thought this OS was destined to be on a Tablet and now here it is. At it’s core, webOS offers the user a quick and relatively easy way to move to any task with JustType. As the name implies, you JustType and you can then choose to send an email, search the web, create a memo, and I assume take advantage of other functionality (Twitter, Google+) once things mature a bit further. If you think about a user picking up a Tablet, this just makes sense. You turn it on, you type a few keystrokes, and then you move to the task at hand. Apps get out of the way (a good thing here since there aren’t many) and you do your thing.

Synergy is another feature of webOS that attracts me. It is the closest thing to a single sign on that I’ve seen. It isn’t there yet in webOS (what no Twitter?) but it has the potential to be. Your contacts can currently be synergized from your email and Facebook and this makes life regardless of whether you are on a Tablet, a phone, or a desktop so much nicer. 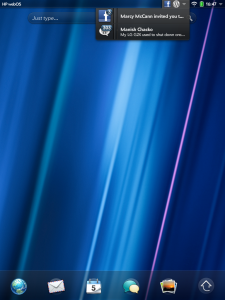 Notifications. Again, a real winner. Of all of the systems and devices I’ve tried, I like the webOS notification system best of all. It annoys just enough, gets out of the way easily, and it just works. Apple is playing catch up here. Android could learn a lot as well.

The Card and Stack metaphor is also a very good UI tool. Sliding Apps up and out of the way to get rid of them makes so much sense on a touch Tablet. I’ve thought that since the introduction of webOS and I still do. Stacking cards that go together also makes sense. And, hey, you can even slingshot those Apps away with Angry Birds sound effects if that’s what you’re into. I know HP says the Enterprise is it’s aim, but frankly the way the card and stack metaphor works seems tailor made for the younger set.

Multi-tasking. Admittedly I’ve only been working with the TouchPad for a few days. But in those few days I can see where those who are a fan of the way webOS handles multi-tasking have turned into fans. Again, reduce and App to card size, open another App and you’re off and running.

The points mentioned above are what I believe to be the big differentiators between webOS and its competitors. They are also I think important ones that I hope HP builds on in the future.

This is admittedly a very personal and subjective point. I know many folks like smaller sized Tablets for mobility, but I prefer the 9.7 inch size of the TouchPad and the iPad. These sizes just feel right in my usage and more to the point, on how I expect a Tablet to feel. In contrast, the Samsung Galaxy Tab 10.1 that I’m also working with has what I call an elongated screen that I find unpleasing in portrait mode. But again, this is a personal preference. Since this falls into the category of form factor, I will say that I’d love to see HP keep the screen size but decrease the weight of the TouchPad in the future.

I never thought I’d say this since I’m not an Adobe or Adobe FLASH fan, but I do appreciate the full browsing capabilities that the TouchPad’s browser brings to the table. I also like that most sites I’ve viewed don’t recognize the TouchPad as a mobile phone and I get the full website view and not the abbreviated mobile view. 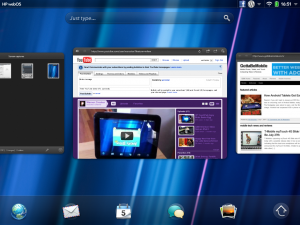 I’ve seen reviews say that they are experiencing iPad like battery life and some complain that they are receiving much less. In my usage, and without running any sort of benchmark tests, the TouchPad holds up very well as compared to the high 10 hour battery life bar set by the iPad. Using it throughout Sunday and Monday with no new charge up between, I ended the day Monday with about 20% of battery left. I call that more than sufficient.

I like that the action button light blinks when you have a new notification when the Tablet screen is off. I like that the App Catalog or App Store labels TouchPad Apps as TouchPad Apps compared to how Google’s Android Marketplace leaves users in the dark. I like the ease of printing via the Print Manager. I like how things appear on the screen. Screen real estate is used well in both landscape and portrait modes. I like the feeling of touching the screen and what I can see of how my finger interacts with what I’m touching. As I mentioned in the previous post, there is a sluggishness that rears its ugly head between that interaction and the eventual reaction that needs to be addressed. While not a big factor, I appreciate the sound quality via the Beats Audio technology. It is decidedly better than any other Tablet and some laptops I’ve used.

Well there you have it. I’m sure I’ll have more to offer as the days go by. Is the HP TouchPad a worthy contender to the throne? Well, considering that its strengths and its weaknesses are on par with most of the other competitors I would say yes. Considering that HP has the muscle and the resources to correct some early negative first impressions, it should definitely be a competitor, assuming HP uses that muscle and those resources appropriately.

I was contacted the other day by a self described Apple hater after she read that I bought both the TouchPad and the Galaxy 10.1. She seemed pretty desperate to get a Tablet but was frustrated by what she was reading about Android Tablets and the TouchPad. She wanted me to let her know which of these two I would eventually recommend. So, here’s my answer. While it is still too early to tell in my testing of both the Galaxy Tab 10.1 and the TouchPad, I will say without question that I prefer the TouchPad. If you ask me which Tablet to spend $500 to $600 on at the moment, I’d tell you to choose an iPad currently. But if you don’t want to go that route, want a Tablet right now, and you’re comfortable picking up a first generation device that may or may not see great Apps support down the road, I’d choose the TouchPad over the Galaxy Tab 10.1. That said, that’s a comment based on what I’ve seen and gone hands on with for a few days. I’ll be writing more about the TouchPad and the Galaxy Tab 10.1 in the days to come. I doubt my opinions will change much, but that’s how I’d call things today.