Flappy Bird is the gaming craze that just won’t die and thanks to the open nature of Android, many users are searching for a Flappy Bird Android download, installing the first FlappyBird.apk they find to get back to flapping through pipes — but this could cost users and infect their phones.

Android smartphones and tablets allow users to install apps from unknown sources, like a FlappyBird.apk file downloaded from a file sharing site or link shared on Facebook. This is a great feature for users that want the ability to run any app they can find, but unfortunately it is something that hackers and scammers use to take advantage of some Android users. 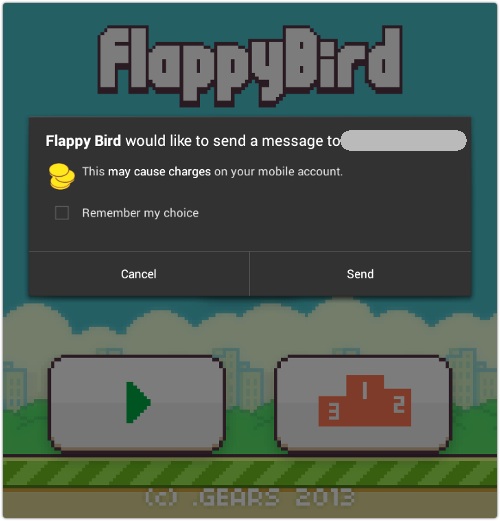 Flappy Bird Android downloads could cheat users out of cash thanks to Malware.

Apple users cannot easily install Flappy Bird from a random internet download without first jailbreaking the device. By locking down the app installations to the App Store, Apple claims to offer a safer user environment. For the average user Android is safe with the installs locked to the Play Store as well.

Sophos Security downloaded a malicious FlappyBird. apk Android install file and discovered it asks for a lot of unnecessary permissions, including the ability to send a text message on behalf of the user.  When the game starts users can play briefly, but then a trial is over notification pops up and the app asks the user to send a text message. Sophos blocks out the text message number but confirms that it is a premium SMS number.

The game asks users to send a text message to reactivate Flappy Bird, but that is not something that the original or many of the other knock offs do. The free Flappy Bird game was ad supported with no trial section, and the new Flappy Bird clones and knock offs on the app stores similarly make money on ads, not on text messages.

Users should be wary of any Flappy Bird Android downloads and any apps found outside of the Google Play Store. There are many legitimate Android apps that come from alternative Android markets, but it’s good to use a little extra caution. Sophos recommends using an Android security application like Sophos Free Antivirus and Security for Android. There are also other options like Lookout Security & Antivirus which provides similar protection and lost device tarcking. Both of these options are free.