Though the move may be welcomed by business travelers who do not want a lengthy flight to interrupt their business calls, all flyers ultimately will ultimately be faced with a dilemma–the trade-off for phone connectivity is the peaceful respite of a quiet flight.

One of the agencies that is exploring the lift on this ban is the Federal Communications Commission, or the FCC, according to a report on CNET. The agency scored a small majority 3-2 vote at its meeting that will open up the issue for public comment. This just gives the public a chance to participate in the discourse and the vote doesn’t mean that the FCC will be lifting the ban. 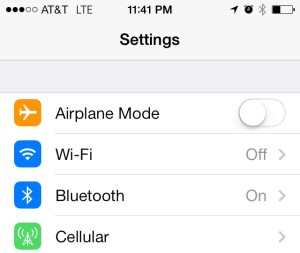 Still, even with FCC approval of such a matter, gabbing flyers will have to rely on the Department of Transportation, the office that manages the Federal Aviation Administration, to rely make the decision on whether in-flight calls will be permissible. Even then, it will be up to the airlines if they will allow consumers to make calls during their flights.

Progressive airline Virgin Atlantic has for about a year and a half now allowed customers to make and receive calls and send and receive text messages on flights flying over 35,000 feet across the Atlantic.

“The FAA is the expert agency on determining which devices can be used on airplanes,” FCC Chairman Tom Wheeler told Congress.

“The FCC is the expert agency when it comes to technical communications issues. We are not the Federal Courtesy Commission. Our mandate from Congress is to oversee how networks function. Technology has produced a new network reality recognized by governments and airlines around the world. Our responsibility is to recognize that new reality’s impact on our old rules.”

Cell phones were and are currently banned from use during flight because it was thought that the frequencies used by cell phones could interfere with in-flight communications radio that were used by pilots. As such, they were not allowed for use on a plane, but Wheeler says that if these assumptions were not accurate then the rule would not be valid.

Essentially, the FCC will be tasked with whether or not cell phone radios cause harmful interference while the DOT and the FAA will be exploring the issue of whether the use will be appropriate for the confined transportation vehicle of a plane.

The FAA had recently been acting more progressively with technology, and the latest move could help to modernize air travel. The agency had just recently approved a measure that allows small personal electronic devices, like e-readers, tablets, and other digital devices, to be used during the take-off and landing period. In the past, these devices must be stowed and powered off when the plane is hovering below 10,000 feet, but the change now essentially allows gate-to-gate use of these devices through all phases of flight.