For months we’ve been sharing iPad 3 rumors with you, and when Apple has announced the iPad 3 event for March 7th, we found even more to tell you about.

Once you get past the buttonless iPad 3 and the high resolution display on the iPad event invitation, you might want to settle in for some iPad 3 facts.

While we can’t go crashing through the gates at Foxconn or find an iPad 3 in a bar, we can share iPad 3 Facts from Joy of Tech.

Nitrozac and Snaggy have put together a hilarious collection of iPad 3 Facts, in the style of Chuck Norris Facts. You can see a few of the iPad 3 facts below, and the full comic on GeekCulture. 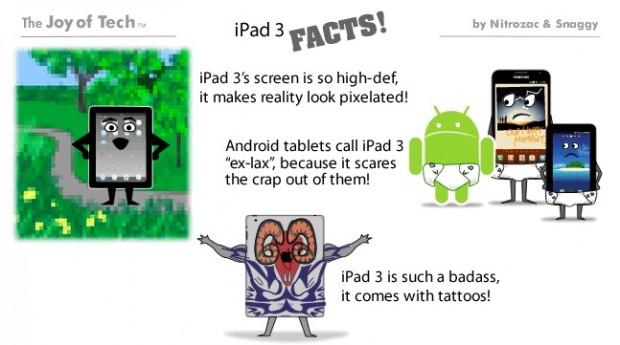 My favorite iPad 3 Facts are listed below.

As for real iPad 3 facts, features, specs and pricing, we won’t have anything official until March 7th. If you want to see our best guesses for the iPad 3 event, I suggest you read, What to Expect at the Apple iPad 3 Event, where Adam Mills lays out the latest rumors and expectations.

We’ll be bringing you the iPad 3 Announcement event on March 7th, followed by iPad 3 guides and our full iPad 3 review as soon as the iPad 3 is released.