When Apple introduced the iPhone’s tap to focus camera, it brought with it the ability to take sharp pictures and gave users greater depth of field control over their pictures, similar to a a single-lens reflex (SLR) camera. Lacking some of the software controls to accomplish a similar feat, hardcore camera phone fanatics behind the Nokia N8–which is still the reigning camera phone king for many–began devising hardware-side hacks to achieve even better performance, greater zoom, and even SLR-like focusing capabilities. In the past, we’ve seen the Nokia N8 used to shoot magazine covers, short films, and some feature film clips, and the latest hack will definitely further the utility of the Nokia N8 should users want to achieve even greater results with the 12-megapixel shooter, Carl Zeiss optics, and Xenon flash. 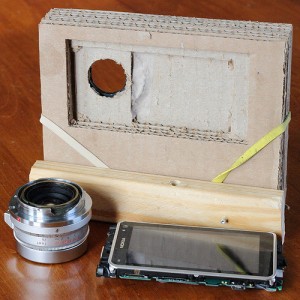 A Nokia N8 user had gutted the N8 from its unibody aluminum shell and created a cardboard mount for the phone. The cardboard mount also houses an adapter to hook up to a Leica M lens. This is the same user that brought interchangeable Canon lenses via a similar adapter to the Nokia N8 before, which proved to provide excellent results. So why Leica lenses? According to the user, this is why the Leica M lenses is a better fit for digital photographers with the Nokia N8, should any other user want to try this custom hardware hack:

Unfortunately, the hardware hack solution itself is far from elegant, but you can see from the image quality captured in the YouTube video embedded below (starting at 5:24) that the image result makes up for the bulky package if you’re a person who likes to tinker and enjoys photography. 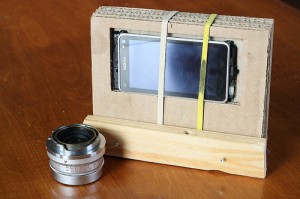 In the past, less cumbersome lens solutions have been devised for the iPhone, which mounts a macro, wide angle, or fish eye lens to the iPhone’s camera on the rear of Apple’s smartphone. However, such after-market solutions do not provide for optical zoom and better depth of field control that this custom hack job provides.

You can read more about the hacker’s work over at They Call This Life.

Polaroid itself is entering the smart camera market, creating a camera-first hardware solution that comes with a wireless radio capable of making voice calls and a recent Samsung trademark filing for a Galaxy Camera suggests that Samsung will be combining its phone- and camera-making expertise in a similar model in the future. Nokia is said to be working on a Symbian-powered Nokia N8 successor.