Former Google executive and now CEO of Yahoo Marissa Mayer is now proposing that Yahoo supply iPhones for all its employees. In an executive staff meeting, Mayer expressed interest in having her employees carry an iPhone, though supporting a corporate Android phone for all employees was also a possibility. Mayer had made waves at Google as she used Apple’s smartphone as her daily device, rather than the many number of Android phones running Google’s own operating system. 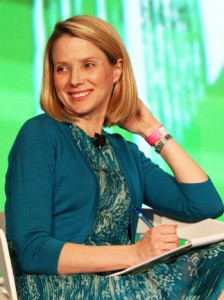 Up until now, All Things D reports, Yahoo “has largely been a BLackBerry world world,” and that could be a reason “why the company has lagged in the mobile arena.” The publication noted that many Yahoo employees carry around a second Android or iPhone smartphone as a personal device.

It’s unclear what the impact would be for Yahoo or for employee productivity with the switch in platform. Productivity is something that may go up, but more than likely software engineers at Yahoo may become more in tune with how the company’s web and products work as they create it at work and use it at home on a device that is their own.

PhoneArena cites that the switch could cost Yahoo around $2 million.

Yahoo would be another big company that’s moving away from Research in Motion’s platform, which was once the leading platform for businesses thanks to features like security, push email, reliability, and a robust messaging ecosystem with BBM. Most recently, published statistics predict that Microsoft’s slow growing Windows Phone may eclipse RIM’s market share by as early as November 2012, which is attributed largely by RIM’s more rapid declining marketshare rate rather than Microsoft’s gains.