While Verizon Wireless and Motorola have both promised that there will be a 4G LTE upgrade to the Motorola Xoom tablet, which will initially be launched as a 3G CDMA-only device, after launch, neither company have announced how the process will work. A leaked internal document obtained by Droid-life now tells the story, and if true, the upgrade will require users to send their devices back to Motorola, wait six days for the radio to be swapped. That process will be available 90 days, or 3 months, after the Xoom is launched today. 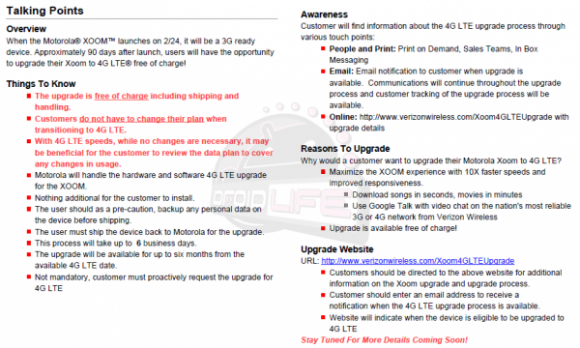 According to the document, the good news for early adopters of the 3G-only Xoom is that the hardware swap will be a free process and will include free shipping and handling. As we had heard before at CES, the upgrade will actually require a radio swap–Motorola will replace the 3G chip inside the Xoom with a 4G LTE chip–so it won’t be a simple software update over-the-air, necessitating the shipping process.

Motorola will update both the software and the hardware to deliver 4G LTE compatibility at that point.

The information should be available and published soon at: https://www.verizonwireless.com/Xoom4GLTEUpgrade