A leaked roadmap of Fujitsu’s planned 2012 roadmap reveals that the company will be making a push into the Android, tablet, and ultraportable computing segment with several new product introductions, including a tablet product that aims to take on the Asus Eee Pad Transformer (and Transformer Prime and TF300T models) with a hybrid transforming form factor design. Fujitsu, which is no foreigner to tablets, have in the past released a number of tablet PCs running Microsoft’s desktop-class Windows OS in slate and convertible form factors, and the latest transformer build will add another design to Fujitsu’s portfolio. 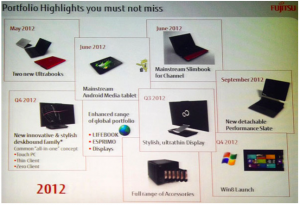 The product, which is slated to be introduced in September 2012 according to the leaked roadmap, will have a form factor that’s similar to a notebook, netbook, or ultrabook. However, like the Asus Eee Pad Transformer, the display is detachable and once detached, users can use the display as a traditional slate tablet. When docked, the keyboard, trackpad, and access to additional ports and potentially an extra battery will help to create a computer-like experience that’s compact and easily portable.

It’s unclear if the transformer concept will be running on Microsoft’s Windows 8 operating system, which will be touch-enhanced for tablet form factors, or if it will run on Android OS. Fujitsu has been a strong tablet PC proponent with exceptional hardware in the past, but the computer-maker has also been making a big push into the consumer sphere with Android smartphones and tablets recently. Moreover, Fujitsu’s product slide already lists Android specifically with a proposed tablet that’s geared to launch in June 2012 and a Windows tablet specifically for Q4 2012.

The transforming tablet is described as a ‘new detachable performance slate.’