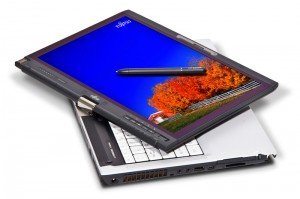 Though hardly an earth-shaker in terms of CES 2011 news, Fujitsu’s announcement of the Lifebook T901 Tablet PC, a refresh of the T900, has some interesting details snuck in with it, including mention of five-finger multi-touch detection.

Got the tip this morning from Giacomo at Il Tablet PC Italico who uncovered the data sheet, which states “Dual Digitizer for pen input plus capacitive 5-finger multitouch screen”. That’s a three-finger bump from the T900’s Wacom dual digitizer, as well as one-up on the N-Trig DuoSense. What’s unclear is whether this upgrade is through new hardware or a long-awaited driver update for the current Wacom dual digitizer. I hope it’s the latter.

In addition to the usual under-the-hood bump, in this case to the newly announced Sandy Bridge chipset, the sheet reveals GPS via the optional 3G/UTMS module, an HDMI port, one USB 3.0 port and one USB 2.0 port with Anytime Charge allowing it to charge USB devices even while the PC is off. It also mentions a Blu-Ray drive option for the modular bay, but I expect that will also work on other Lifebook models.

The official press release (via Slashgear) offers nothing specific about the T901 but mentions the Lifebook line will include a “0-Watt” AC adapter that draws no power while the notebook is off. Hopefully that’s only if the battery is fully charged and there’s nothing drawing power from the Anytime Charge USB port. Pretty much the same as the T900 otherwise, so if you’ve been eyeing that model, it might be worth waiting a few months for the T901.

Update: PCMag.com reports it will feature NVIDIA Optimus technology, but I don’t see that anywhere else. I suspect that was a misquote or error on the part of a company rep.