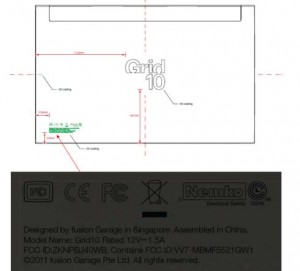 FusionGarage, the maker of the JooJoo tablet after a public dispute with TechCrunch over the CrunchPad partnership, may be readying an Android successor to its original web-based proprietary tablet. A schematic of the device is seen going through the FCC for regulatory approval, and the rendering shows a ‘Grid 10’ name on the rear side of a tablet-esque device. Little else is known about the device, though the 10 in the name may suggest that the device will be a 10-inch slate.

The original JooJoo ran a proprietary web-based user interface and suffered many setbacks including delayed launch, a public dispute with TechCrunch that may have made consumers uneasy, and price increases along the way. Ultimately, it launched close to the time that Apple debuted the more capable $500 entry-level iPad and the emergence of Android-based offerings forced JooJoo out of the market.

FusionGarage had promised that it would focus its efforts in the future on the Android operating system, and this Grid 10 FCC filing may be the result of that work.