One of the chief complaints about the iPhone today is that the smartphone lacks a notification light to alert you, without having to turn on your phone’s display, if you have any missed calls, text messages, or emails awaiting you. On several other competing devices, notification lights–and some that you can customize various colors depending on the type of notification or who it’s from–allows you this flexibility. And thanks to an uncovered Apple patent filing, we know the iPhone-maker is considering a new notification mechanism that will allow users to see their notifications without turning on their phone’s display. 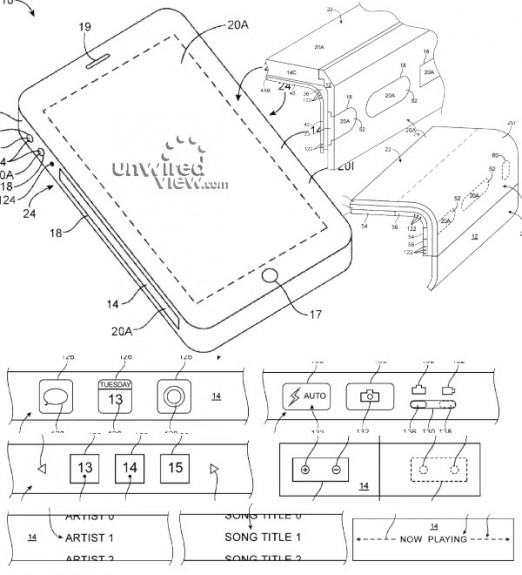 Apple is considering, as part of that patent, the placement of OLED displays on the sides of the iPhone. OLED displays are more power efficient than LCD displays if implemented correctly, and the display can be used as a secondary display for button functionality as well as displaying messages and notifications. This is what Unwired View reported of the second display:

The first patent app is called “Electronic devices with sidewall displays”. The idea is to split the iPhone’s flexible  display into two parts – the main front touch screen, and control area for a sidewall, after a bend. This way Apple gets to replace physical volume keys with programmable touch controls for camera, music player and other stuff, plus gets some additional screen real estate to display messages and other info without turning on the main display.

Though this isn’t as simple as seeing purple blinking LED light on your BlackBerry and knowing you have work emails to respond to or seeing blue LED and know it’s an SMS, Apple’s system provides more information than LED light notifications on prior systems.

At this time, we still don’t know if Apple intends on commercializing this patent idea for a future iPhone, but it may be a great feature for those who want notifications accessible without having to turn on their phone’s screen or reach for the nearest iWatch or smart watch. A current work-around for a notification light requires users to enable the accessibility feature.

This isn’t the first time that we’ve seen a secondary display on a smartphone. Samsung introduced a similar concept, though with much more limited functionality, on the Galaxy S1 variant known as the Samsung Continuum for Verizon Wireless. It remains to be seen what could be of the Continuum’s secondary display had Samsung opened up the display to developers.