Earlier today, Google finally announced the Nexus 5 and the Android 4.4 KitKat update, both of which are now available on the Google Play Store, at least for now. The Android 4.4 KitKat update is particular is interesting to Android users because it will be touching down for an assortment of devices including some older devices. The Nexus 7, Nexus 4 and Nexus 10 have been confirmed while Google also revealed that it will be coming to unnamed older devices in due time.

Fortunately, the Galaxy Nexus has a solid community and we should see several Android 4.4 KitKat options spring up from the development community for Galaxy Nexus owners. 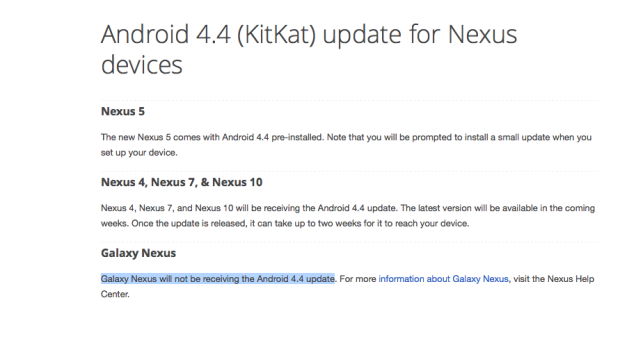 Owners of the Nexus 7, Nexus 10 and Nexus 4 will see the Android 4.4 KitKat update roll out soon though Google remains coy about a specific release date for the software. An insider claims that the HTC One Google Edition will get the Android 4.4 update in one to two weeks so it could be that we see it roll out sometime soon.