While your local Verizon store only has a few Galaxy Nexus cases, I’ve crawled the web to find the best collection of Nexus cases from top case makers. Wether you need tough protection or a fashion accessory, you should find a case that fits your needs and your Galaxy Nexus below. 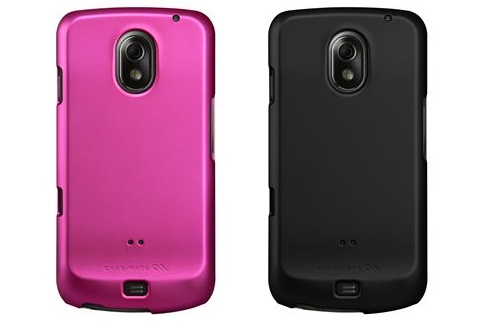 The CaseMate Galaxy Nexus Barely There case offers protection from scratches and small drops without adding a lot of bulk to your device. This is a snap on case, which will add protection to your device, but the top and the bottom of the case does not offer a lot of protection. This case comes in black and in a bright pink. 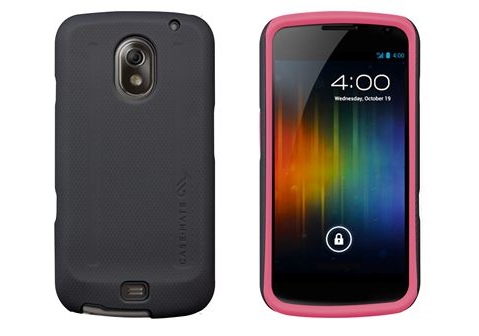 In addition to the slim case above, the CaseMate Galaxy Nexus Tough Case is available. This case brings rugged protection to the case with form-fitting silicon protection, bolstered with a hard plastic shell. You can get this rugged Galaxy Nexus case in black and bright pink. 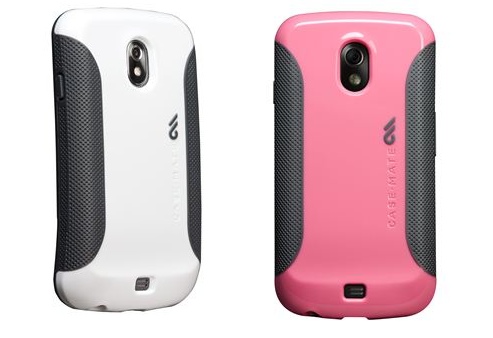 The Incipio Galaxy Nexus Sylicrylic case is a hard case that comes in a variety of colors and includes a screen protector. Thanks to the silicone core and hardened outer cover, you get more protection than a standard silicone only case. Available in four colors, this is a nice case option that will fit the Galaxy Nexus with an extended battery. 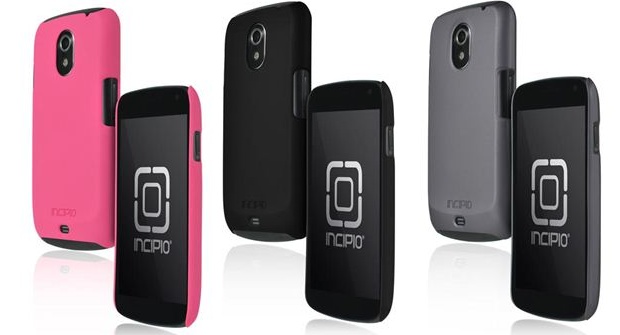 If you want a slimmer profile, check out the Incipio Galaxy Nexus Feather Case which has a 1.5mm thickness. This hardshell case comes in 3 colors, pink, grey and black. You also get a screen protector and full access to the important ports and buttons. 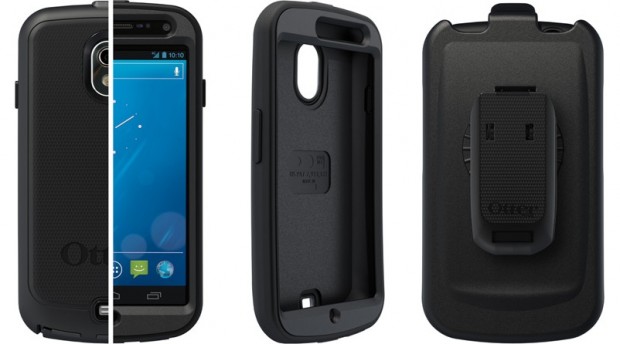 When it comes to protection, it is hard to beat the OtterBox Defender Galaxy Nexus case. This two piece case includes silicon and hardened plastic to keep your Galaxy Nexus safe from shocks and drops. It also includes a holster to attach to your belt, pocket or bag. You can find this one online or at most Verizon retailers. You also get a screen protector. 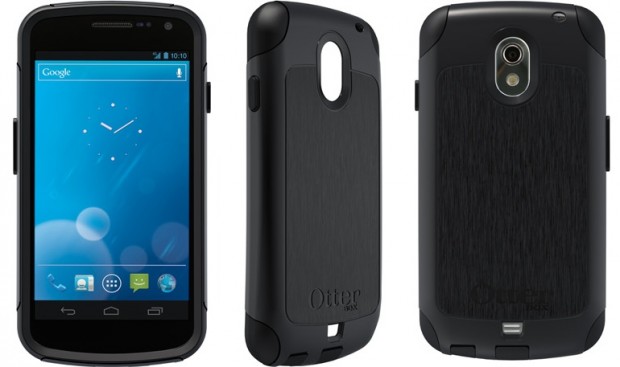 If you don’t need as much protection as the Defender, the OtterBox Commuter case for the Galaxy Nexus will still give you a decent amount of protection, but offers a slimmer fit.  This OtterBox case is more aimed at average users that want extra protection, over construction or outdoor workers. You get a screen protector as well. 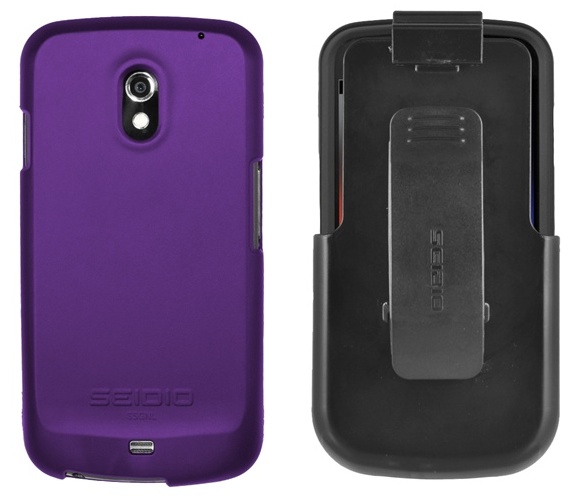 Seido is known for making great cases, and the Seido Surface and Surface Combo cases for the Galaxy Nexus look to be more of the same. The Surface cases fit both the International and Verizon 4G LTE versions of the Galaxy Nexus, and come in black and amethyst. For $30 you get a snap together case that protects your Galaxy Nexus, and for $20 more you can get the combo which includes a compatible Surface holster. 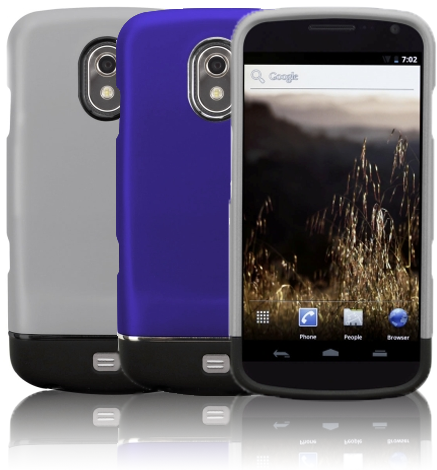 The Body Glove Icon case for the Galaxy Nexus is a hard case with a soft touch finish. This case slides on to your Galaxy Nexus and comes in two colors. This simple case offers access to all the ports and buttons you need, so you can leave the case on your Galaxy Nexus all the time. 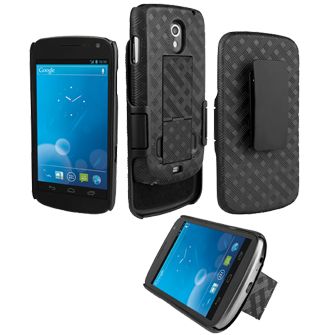 If you miss the kickstand from your previous phone, the Verizon Galaxy Nexus Shell and Holster adds it back and includes a holster that protects the front of your device. Unfortunately this case doesn’t appear to work with the extended battery according to early users, so try before you buy.

Verizon offers a small silicon case that covers the Galaxy Nexus in black, purple and blue. There is also a matte black option. These cases are simple, but offer an additional layer of protection for users who are prone to drop their phones. available online and at most Verizon retailers.

Available only at Best Buy in store, the RocketFish Galaxy Nexus case is a snap on case that offers a matte black finish and works with the extended battery in place. Note that there appears to be some manufacturing differences so some cases fit the extended battery better than others so you will have to head in store to purchase your case. Check out XDA for a few user images of the RocketFish Galaxy Nexus case. 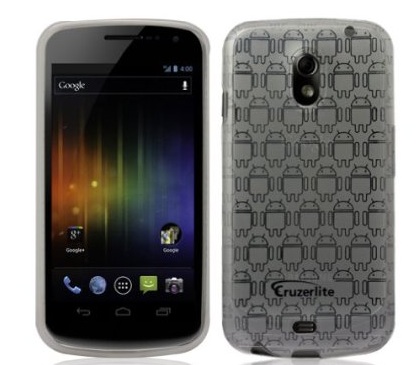 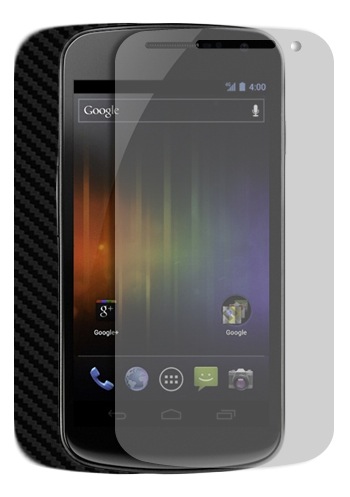 Add a Carbon Fiber Skin to Your Galaxy Nexus

If you want to spruce up the back of your Galaxy Nexus without adding bulk, the Skinomi Carbon Fiber Galaxy Nexus skin should do just that. We expect to see options from Gelaskins, BodyGuardz and DecalGirl in the near future, but if you cannot wait, this option looks like it will work. I am guessing it will fit the Extended battery cover as well. The kit includes a screen protector.