We realize that many of you out there looking to get your hands on the Verizon version of the recently announced Samsung Galaxy Nexus are probably a little worried after Big Red announced that the device would be coming “later this year” but failed to give any sort of specific release date. Maybe you think that it will miss that rumored November 10th release date.

Well, it’s certainly possible that Verizon might change things up, but, according to some new evidence from Droid-Life, that rumored November 10th release date is still alive and well.

What you see here is a new Verizon MAP and you can clearly see that the Galaxy Nexus is listed as being available on November 10th. It’s possible that this is a pre-order date as well considering the Droid RAZR is listed under October 27th, the day that it goes up for pre-order. 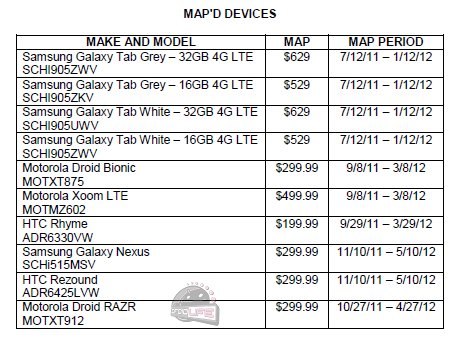 If anything, at the very least, this is proof that the device hasn’t been delayed into eternity and that you should be expecting it to arrive in the next couple of weeks.

Keep those fingers crossed though.