The Samsung Galaxy Note 2 Android 4.3 Jelly Bean update roll out is nearly complete in the United States as the AT&T Galaxy Note 2 has finally received word that it will officially be getting the upgrade to Android 4.3 Jelly Bean today, an update that comes several weeks after other carriers in the United States received the update and several weeks after its supposed release.

This decision kicked off a ton of speculation, fueled in part by a leaked document that indicated that most Galaxy Note 2 Android 4.3 updates would arrive during the month of November. That, unfortunately, did not happen as Sprint was the only carrier to come remotely close to its rumored Android 4.3 Jelly Bean update release date.

Soon after, T-Mobile and U.S. Cellular followed suit leaving the two major carriers, AT&T and Verizon, as the only carriers left in the United States without the upgrade. Today, weeks after it appeared on Samsung’s website, the AT&T Galaxy Note 2 Android 4.3 update has been confirmed by Samsung and it will be rolling out starting today. 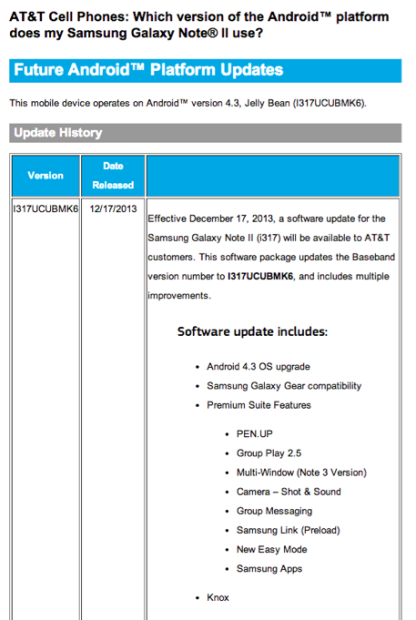 AT&T’s updates typically take a few days, at least, to roll out so it’s possible that users won’t find the update Over-the-Air today. Those looking to snag the update right now will want to check through Samsung Kies in an effort to start the download and installation process immediately.

This roll out means that the Verizon Galaxy Note 2, like the Verizon Galaxy S3, is officially last to the Android 4.3 Jelly Bean update, at least amongst major carriers. Verizon was one of the first to roll out the Galaxy S4 Android 4.3 update, something that inspired hope amongst Galaxy Note 2 and Galaxy S3 owners on the carrier but it’s clear that Verizon hasn’t changed, at least when it comes to software updates for older devices.

Verizon’s Galaxy Nexus remains without an Android 4.3 Jelly Bean update as well. And because the carrier typically doesn’t announce release dates ahead of time, owners of those devices have no idea when the software roll outs will begin.