The Samsung Galaxy Note 2 Android 4.3 Jelly Bean update, which started rolling out earlier this week, has run into at least one lengthy delay as Australian carrier Telstra claims that the update, which it originally said would roll out in November, isn’t likely to roll out until late December. And because other carriers haven’t announced their plans, there is a chance that we could see some delays elsewhere as well.

Of course, these updates haven’t been without their fair share of issues. Already, we’ve seen Galaxy S4 updates pulled in the United States, a Galaxy S3 update pulled in the UK and updates miss their roll out dates in the United States. All in all, it has been a rough ride for many Galaxy device owners. So, it should come as no surprise that we are seeing some bumps in the road for the Galaxy Note 2.

Back in October, Telstra, an Australian based carrier, laid out a game plan for its Galaxy Note 2 users. It claimed that it would receive the Android 4.3 update, from Samsung, in early November and push the update out in late November. This time frame seemed to fall in line with other rumors we had seen. Today though, Telstra acknowledged a change in plans.

The carrier says that Samsung delayed the delivery of Android 4.3 to November 22nd, tomorrow, and that the update is now scheduled to arrive deep in the month of December, far later than expected. While this is a bummer for Galaxy Note 2 owners on Telstra, the delay should also be nerve racking for Galaxy Note 2 owners in other parts of the world. 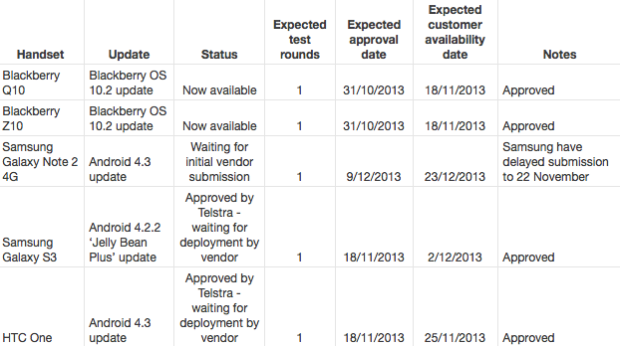 Most carriers don’t offer detailed timelines like Telstra, so there is no telling when Samsung may have delivered the updates or whether there is a delay. At this point, nobody else has come right out and confirmed anything but at this point, Galaxy Note 2 owners should start tempering their expectations a little bit.

Earlier this week, we saw Sprint announce a Galaxy Note 2 Android 4.3 update and we expect that roll out to push out to all owners in the coming days. AT&T’s scheduled Galaxy Note 2 update did not land yesterday, a sign that it might have been delayed. Verizon’s Galaxy Note 2 is scheduled to get its update on November 29th so it will be interesting to see if it gets its update that day or not.

Samsung’s Galaxy Note 2 Android 4.3 upgrades not only deliver Galaxy Gear support but they bring Samsung KNOX and a number of fixes and enhancements to a device that is just now receiving its first major Android upgrades.