All eyes are currently on the Samsung Galaxy Note 2 Android 4.3 Jelly Bean update, an update that continues to roll out in the United States and around the world, bringing Samsung KNOX and Galaxy Gear support along with it. However, we have our eye to the future and here, we want to take a look at what Galaxy Note 2 users should expect after the Android 4.3 Jelly Bean update rolls out.

Back in July, Google announced Android 4.3 Jelly Bean, an update that brought some incremental upgrades and enhancements to Nexus owners. At the time, many flagship devices hadn’t even been updated to Android 4.2 Jelly Bean, leaving many to wonder how the future would play out.

For Samsung Galaxy Note 2 users, it meant a long wait for a major update as Samsung decided to skip Android 4.2 Jelly Bean in favor of the Bluetooth Low Energy enhanced Android 4.3 Jelly Bean. Bluetooth LE is important for Samsung’s Galaxy Gear accessory, a watch-like accessory that syncs with the Galaxy Note 2 and other Galaxy devices via Bluetooth.

After a few weeks, the nostalgia will wear off and Galaxy Note 2 owners will once again be looking toward the future, wondering what might be in the store for them. Signs currently point to Android 4.4 KitKat being the next update for the Galaxy Note 2, an update that has already emerged for several devices including the Moto X.

With that in mind, it’s time to take a look at what we think comes next for the Samsung Galaxy Note 2, after the Android 4.3 Jelly Bean update.

No software update is perfect so we fully expect the Galaxy Note 2 Android 4.3 updates in the U.S. and elsewhere to come with some issues. Problem is, this is an Android device that means that bug fix updates won’t come fast or easy. Samsung will need to work with carriers to develop and test any bug fix update to Android 4.3 which will take some time.

So, those who are experiencing issues with Android 4.3 on the Galaxy Note 2, will likely have to wait a few weeks, if not a few months, for an Android 4.3 bug fix update to arrive.

Users should expect the Galaxy Note 2 to get an update before its next major upgrade. Samsung and carriers will often roll out bug fix updates in the weeks before a major upgrade to prepare the device for the next major piece of software and that’s what we expect here. We expect to see Galaxy Note 2 models get an incremental update in the next couple of months, aimed at tackling any lingering issues inside of Android 4.3.

We can’t speak to what those issues will be, all devices and users are different, but Samsung and its carriers should do their best to push out updates ahead of the Android 4.4 KitKat update that is rumored to be arriving sometime before the end of April.

Android 4.4 KitKat isn’t confirmed for the Samsung Galaxy Note 2 but it’s likely. The device is only a year old and Android 4.3 marked its first major Android upgrade. So, we doubt that Samsung is going to stop there. Instead, we should see Android 4.4 KitKat roll out, barring any delays or issues, sometime in 2014, perhaps in the first half of the year. And here’s where it gets confusing.

Yes, the device will be turning two, but not until September of this year. Galaxy Note 2 users can expect Android 4.4 KitKat, that’s a sure thing, and we wouldn’t be surprised if the Galaxy Note 2 got one more update. Expect one major update, hope for two.

Whatever lies ahead should come with the same update process that we’ve seen from Samsung time and time again. For those that aren’t clear on what that entails, here is a rundown of what to expect in the build up to the next major release which is almost certainly going to be the Galaxy Note 2 Android 4.4 KitKat update:

That’s what we expect and we would be surprised if the roll out process played out any differently. Samsung is a creature of habit and we expect a similar upgrade process for Android 4.4 KitKat and beyond.

Again, even the most stable Android updates likely won’t be safe from bugs. For the most part, the Android 4.4 KitKat update has been playing nice with Nexus devices. In the past, we’ve seen the initial experience get plagued by bugs so this is a good sign. Nexus devices aren’t Samsung devices though and they don’t have complicated TouchWiz software on board.

In 2014, we should see Samsung make some major upgrades to the Galaxy Note 2’s software. That means features from Android 4.4 KitKat, as well as enhancements to the device’s TouchWiz software. Samsung’s major updates typically come with enhancements and fixes on board and we expect to see the same from any updates arriving in 2014. With a Samsung Galaxy S5 due out next year, we could see Samsung deliver some its features to Galaxy Note 2 users. 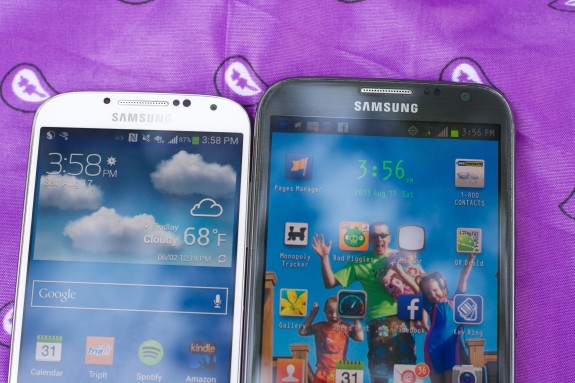 Point is, expect the software experience on the Galaxy Note 2 to improve in 2014, and hopefully make the device feel like a new phone. The company has been successful with this in the past and it’s a reason why people continue to buy these phones. Samsung is simply able to deliver a solid experience throughout the duration of a contract. Look for the additions to TouchWiz to do something similar next year.