The carrier continues to say that the 5.5-inch Galaxy Note 2 phablet is “coming soon” but it refuses to say just when it will arrive. Now, it appears that the release date might occur on October 24th, the same day that the device is scheduled to be unveiled at a launch event in New York City.

Phandroid unearthed not only a photo confirming the device’s “launch” date, but it also provided a photo of what appears to be Galaxy Note 2 stock arriving in T-Mobile retail stores. 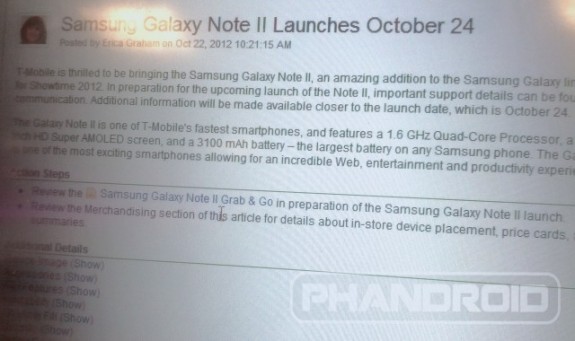 While launch date seemed to be a bit ambiguous before, the fact that devices have arrived points to a probable October 24th release date. Keep in mind, T-Mobile hasn’t announced anything and likely won’t until either tomorrow or Wednesday and that release dates are always subject to change. That being said, it’s looking like T-Mobile might be one of, if not the first carrier to offer the Galaxy Note 2 in the U.S.

If not Wednesday, then likely Thursday as that is the day that Sprint will start offering up the Galaxy Note 2 for $299.99 on-contract. Thus far, AT&T, U.S. Cellular and Verizon, the other three carriers slated to get the Galaxy Note 2, remain silent about release dates, both officially and unofficially.

It’s possible that they could also launch the Galaxy Note 2 in the United States in October but at this point, we can’t be sure.

What we are sure about is the pricing. Sprint, U.S. Cellular and T-Mobile are all going to be offering the Galaxy Note 2 on-contract starting at $299.99 and that should mean that AT&T and Verizon will follow suit as well.

That price will net consumers a 16GB Galaxy Note 2. We’re still unsure of pricing for 32GB or 64GB models or if these carriers will even offer them at all.

The Samsung Galaxy Note 2 is Samsung’s newest phablet and it brings a 5.5-inch HD display, quad-core processor, 4G LTE data speeds, Android 4.1 Jelly Bean and a new S-Pen stylus to the table making it one of the most anticipated smartphones of the year.