There are, however, still some updates that are missing and release dates that remain missing in action. While we wait for Samsung and its carrier partners to fill us in on the rest of the Galaxy S4 and Galaxy Note 3 Android 4.4 KitKat release details, we want to share our updated expectations. Here is what we expect to happen between now and the finish line.

We expect the torrid pace of these two Android 4.4 KitKat updates to continue. While they have already hit a ton of users around the globe, there are still plenty of updates that remain missing in action. However thanks to carriers like SFR in France, ThreeUK in the United Kingdom, and Optus in Australia, we know that there are plenty of updates that are set to roll out in the near future.

AT&T and Verizon still haven’t confirmed their updates nor have they announced any release details. However, we do expect both carriers to push these updates out within the next few weeks.

We’ve heard that the Verizon Galaxy S4 Android 4.4 update, at the very least, is in internal testing at the moment. We haven’t heard about the Verizon Galaxy Note 3 update but we assume that it’s in the same boat. Point is, we know the update is on its way.

It’s very rare to see American carriers months behind their counterparts in terms of timing, the Verizon Galaxy Nexus Android 4.3 update is an exception, so we can’t see AT&T and Verizon releasing these updates beyond the month of April. Instead, we expect them to get delivered in the next few weeks.

…But Continued Silence in U.S.

Expect the silence to continue though. Carriers, especially major ones, typically don’t communicate release dates and update details ahead of time. Sprint recently did with Android 4.4 for the Galaxy Note 2 and Galaxy S3 and U.S. Cellular did with its Android 4.3 updates for its Galaxy devices but those came as a surprise.

AT&T and Verizon almost never confirm details ahead of time so users should expect to hear about their roll outs either on the day of the roll out or just a few hours before hand. We expect Galaxy S4 users on smaller carriers to be in the same boat as we’ve already seen social media accounts for C Spire and Cricket deflect questions about Android 4.4 KitKat.

Long Waits for Some

While we expect the remaining U.S. carriers to deliver their updates in weeks and not months, there are other carriers that will almost certainly be lagging far behind the rest of the pack.

While we expect updates to continue to emerge at an extremely fast pace, the overall roll out itself will probably last for several months.

Smaller Carriers In and Around Last Major Release

We saw this take place with the Android 4.3 Jelly Bean updates for the Galaxy S3 and Galaxy S4 and it’s common to see smaller carriers roll out their updates just days after the larger carriers get their fill.

A few weeks ago, AT&T said that it was investigating the major GPS issues that have been impacting its Galaxy Note 3 users for months. The carrier said that it would issue a fix in a future update though the carrier did not spell out which update it might be. The logical update is Android 4.4 KitKat, an update that remains unreleased. 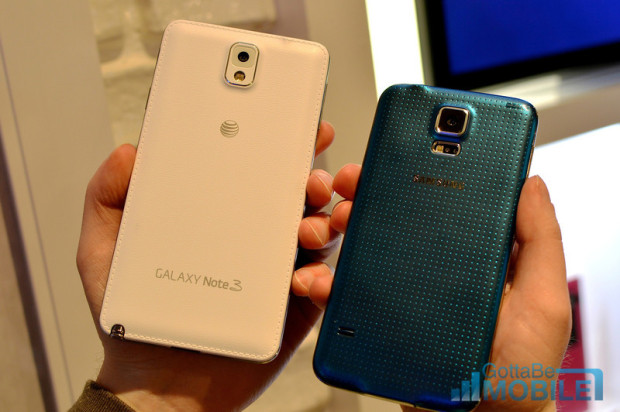 Given its confirmation, given how bad of a problem this is, given that major fixes usually arrive on major Android updates, and given that Android 4.4 KitKat still hasn’t rolled out for the AT&T Galaxy Note 3, we expect that this update will at least attempt to patch up the spotty GPS signals that plague some Galaxy Note 3 users.

We highly doubt that there will be any more significant Android 4.4 KitKat update leaks for Galaxy Note 3 and Galaxy S4 users. We haven’t seen any emerge over the past few weeks and leaks for specific carriers, particularly those in the United States, are extremely rare.

Not that this is a big deal. We almost never recommend installing test software. It’s often buggy and it can be a pain to replace once the official update arrives. Again, we’re expecting a number of updates to roll out in the next few weeks so most owners simply need to sit back, remain patient and wait for Android 4.4 KitKat to come to them.