In the past two weeks, we’ve seen a ton of movement in regard to the Samsung Galaxy S4, Galaxy Note 3, Galaxy S3, and Galaxy Note 2 Android 4.4 KitKat updates. Updates have rolled out, others have been confirmed, and we’ve even seen some bad news emerge for some Galaxy users. Here, we break that all down and fill Galaxy owners in on the latest regarding Android 4.4 KitKat.

More recently, we’ve seen the Android 4.4 KitKat update start spreading to some of the most popular devices around: Samsung’s Galaxy series. After a few weeks of silence, Samsung not only started to roll updates out but it also confirmed a great number of them for owners in the United States and Europe.

The KitKat updates for these devices aren’t going to be a game changing updates but they’re still important nonetheless. Instead of Galaxy S5 features, they bring the functionality that Google revealed back in October in addition to carrier-specific enhancements and fixes. Each update is going to be a little bit different.

In the past two weeks, we’ve seen a ton of Android 4.4 KitKat information trickle out for Galaxy Note 3, Galaxy Note 2, Galaxy S3, and Galaxy S4 users. We’ve seen updates confirmed, we’ve seen roll outs begin, we’ve even seen updates teased ahead of their roll out dates. That said, there is a ton of information out there for Galaxy owners to digest and we want to help break it down for those who are looking forward to moving past Android 4.3 Jelly Bean. 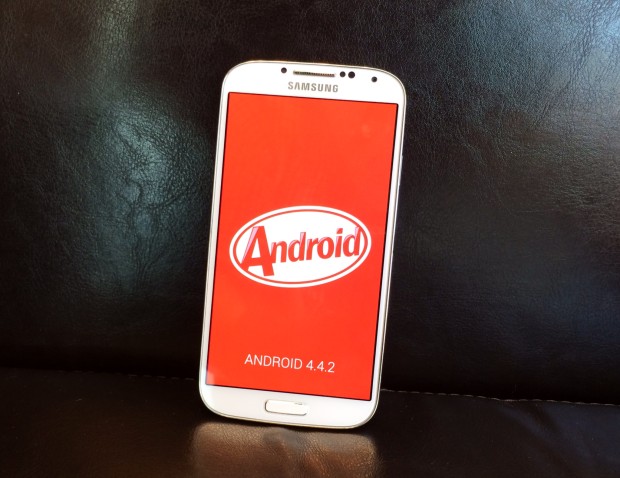 We’ve also pointed out that there should be some long waits in store for many Galaxy S4 owners, particularly in Australia where carriers are behind schedule with Android 4.3.

We also expect the United States to keep pace with its foreign Galaxy S4 counterparts.

On Wednesday, the company announced that it had begun rolling out the Galaxy S4 Android 4.4 KitKat update to its users. The update is currently available through the device’s settings and those interested can simply head in there and pull the software.

Here is what AT&T Galaxy S4 have to look forward to after installing Android 4.4 KitKat:

AT&T recommends having at least 50% battery life when installing the update and of course, users will want to be on a Wi-Fi network in order to complete the update.

The Sprint Galaxy S4 Android 4.4 KitKat update is done. Sprint said that it would take around 10 days to complete and we’re guessing that if the update isn’t already complete, it’s pretty close.

We’re still not sure when the T-Mobile Galaxy S4 Android 4.4 KitKat update will roll out but we do know that it will be coming at some point in the future.

Samsung’s website currently shows the T-Mobile Galaxy S4 running Android 4.4 KitKat. Obviously, the device isn’t running Android 4.4 at the moment so this is nothing more than a tease. However, it does point to an update arriving in the not-so-distant future.

T-Mobile will likely confirm the update on the day of its arrival and T-Mobile owners should not expect a release date to arrive well in advance of the carrier’s upgrade. At best, we’ll see an announcement a day or two ahead of time.

We still expect Verizon’s roll out to be out in front of most of the regional and pre-paid carriers that offer the Galaxy S4. We still haven’t seen any dates for them either but usually, they roll their updates out right around the time that the last major carrier gets its upgrade. At this point, it’s looking like that will be the Verizon Galaxy S4.

The Galaxy Note 3 Android 4.4 KitKat update started to push in January though it did hit a bit of a lull for a couple of weeks before reigniting earlier this month.

Recently, we saw Samsung Poland and Samsung USA confirm the update for arrival and we’ve also seen Samsung push out bug fix updates for users in Poland and Russia who were affected by a bug that rendered some third-party accessories useless.

We expect the speed of Samsung’s Galaxy Note 3 Android 4.4 KitKat push to increase in the coming weeks and for carriers in the United States to continue to keep pace with their counterparts.

While AT&T hasn’t rolled out the Galaxy Note 3 Android 4.4 KitKat update yet, we recently spotted it lurking on Samsung’s website. Again, this is further confirmation of its existence and a sign that the update could be right around the corner.

AT&T usually doesn’t announce release dates well in advance which means that this tease might be the only thing that owners have to go on ahead of its eventual release.

The Sprint Galaxy Note 3 Android 4.4 KitKat update went live just a few short days ago and it brings an extensive list of enhancements to owners on the Now Network.

Here is what users gain by installing the new software:

The update hasn’t only been rolling out for a few days and typically, Sprint’s updates will push out in stages for about two weeks. So, if it’s not available right now, it should become available in the near future as the carrier ramps up the speed of its roll out.

T-Mobile’s Galaxy Note 3 Android 4.4 KitKat update is unreleased but it looks like it’s going to be coming to users at some point in the near future, probably sometime next week.

Last week, the update appeared on Samsung’s Open Source site for developers, a sign that the public release is just around the corner. It’s impossible to say how long users have to wait but we’re expecting the update to land sometime in the month of March.

T-Mobile is not known to announce updates ahead of time which means that T-Mobile Galaxy Note 3 owners waiting for Android 4.4 will likely be doing so in the dark.

Typically, it’s only a few weeks behind the rest of the pack so we would be shocked if Verizon couldn’t manage a roll out during the month of March Again, Verizon typically does not reveal specific release dates ahead of time which means that users are likely going to be waiting until the day of the release to find out the release date.

The Samsung Galaxy S3 Android 4.4 KitKat was finally confirmed for the United States though Samsung was reluctant to offer a specific release date for the highly anticipated update. U.S. carriers also remain mum on the prospects which means that users are simply going to have to wait and hope that something emerges.

Of course, keep in mind, we heard that Samsung was planning to roll out the Galaxy S3 and Galaxy Note 2 Android 4.4 KitKat updates in March or April so it could be a few weeks, at least, until we find out when U.S. carriers are planning to issue these updates. It’s a good sign that Samsung announced the updates but it does not guarantee  swift releases.

It’s a small update but this is an old device. It’s closing in on the two year mark and owners should feel lucky that they’re getting Android 4.4 KitKat at all. Not only because of its age but because it looks like some Galaxy S3 owners won’t get Android 4.4.

Samsung Poland recently confirmed that the Galaxy S3 Android 4.4 KitKat update would not emerge due to it sporting 1GB of RAM. The U.S. models use 2GB of RAM which means that they should be safe. What this means for other 1GB models is unclear but it could be that the Galaxy S3 misses several regions around the world.

Samsung Poland, like Samsung USA, did confirm an Android 4.4 KitKat update for the Galaxy Note 2. It sports 2GB of RAM after all. Neither company confirmed specific roll out dates which means that all we have right now is the same window that we’ve heard for the Galaxy S3 Android 4.4 Kitkat update.

March and April, at the moment, seem to be the most likely candidates though again, don’t expect to hear anything concrete until we get much closer to the actual release dates.