The Samsung Galaxy Note 4 launch date is confirmed for September 3rd. And with a launch date just days away, we want to make some more predictions about the upcoming Galaxy Note 4 release date, this time with a focus on the release inside the United States.

For more than eight months, we’ve seen Galaxy Note 4 rumors point to the Galaxy Note 4 specs, Galaxy Note 4 launch date and the all important Galaxy Note 4 release date. Rumors that were once vague and mere blips on the radar have firmed up to the point that prospective buyers should feel confident about the specs and dates concerning Samsung’s Next Big Thing.

Earlier this month, Samsung sent out invites for an Unpacked 2014 Episode 2 press event that’s set to take place on September 3rd in Berlin, Beijing and New York City, key battlegrounds for Samsung’s smartphones. And while Samsung hasn’t said the name “Galaxy Note 4”, it’s clear that it will be the star of the show come September 3rd.

On September 3rd, we expect to hear all about the new Samsung Galaxy Note. Familiar Samsung executives will likely take the stage and run down all of the key components including the improved design, the new display, the new processor, the S Pen, the Galaxy Note 4’s new software upgrades, the camera, and so much more.

With an Unpacked 2014 Episode 2 event set to take place in New York City, it’s clear that Samsung has the United States market on the mind. The U.S. is a key battleground for Samsung, and other smartphone manufacturers, and it will likely be a place of focus for the Galaxy Note 4, a device that’s expected to be aimed at the high-end.

In the past two years, we’ve seen Samsung really buckle down on the U.S. release date for its flagship products. The U.S., which at one point used to see devices arrive months after the rest of the world, is now just days behind at the very most. So, we’re expecting the Galaxy Note 4 U.S. release date to once again be a focal point as Samsung battles the iPhone 6, LG G3, and other big name smartphones.

We’d be shocked, shocked, if the U.S. market wasn’t given a specific release date on September 3rd. Either by Samsung or by the carriers that will be playing host to the Galaxy Note 4. Vague release dates aren’t going to cut it with an iPhone 6 launch (September 9th) coming up just a few short days after Samsung makes its big announcement.

Look for Samsung and its carrier partners to appeal to the U.S. market with a specific release date.

Galaxy Note 4 release date rumors currently center around the week of September 15th It’s important to note that that date came from a supposed internal note from Samsung U.S. We’re not confident about the exact date but we’re confident that we’ll see the Galaxy Note 4 hit shelves in the United States sometime next month.

It used to be that American carriers would release Android smartphones days, weeks or even months apart. If you need a history lesson, go take a look at the Galaxy S3 or Galaxy Note 2 releases from 2012. These days, Samsung and its partners have closed the gap and we typically see devices arrive in and around the same day.

We expect the same from the Galaxy Note 4 release date in the United States. Look for carriers to cluster around each other in an effort not to cede any advantages to their counterparts. The iPhone 6 release does have the potential to mess things up a bit but we suspect that the Galaxy Note 4 is important enough that we won’t see huge gaps between U.S. carriers.

If anything expect a difference of a few days, and at worst, a few weeks.

We still haven’t heard anything about Galaxy Note 4 pre-orders for the U.S. market and we probably won’t know anything until Samsung announces the phone on September 3rd. That said, we expect there to be some kind of pre-order for the Galaxy Note 4 across all carriers in the United States.

Even if the Galaxy Note 4 release arrives just a few days after launch, expect there to be a way to buy this phone ahead of its release date. We might even see carriers offer some incentive to pre-orderers as well.

The Galaxy Note 3 will likely drop to the second tier after the Galaxy Note 4 release date which isn’t a bad thing for those that want to get a Galaxy Note on the cheap.

We expect the Galaxy Note 4’s arrival to be a catalyst for Galaxy Note 3 price drops across U.S. carriers and retailers as they attempt to offload last year’s model at a discounted price. We also wouldn’t be surprised if retailers chopped the prices of the Galaxy S5, HTC One M8, and perhaps the LG G3 to make them more attractive alternatives to the Galaxy Note 4 and the iPhone 6.

This is just one of the reasons why we recommend holding off on buying a smartphone right now. The arrival of the Galaxy Note 4, and iPhone 6, should drive down prices in September and beyond.

Now that we have the broad picture out of the way, let’s take a look at what we expect from each carrier.

AT&T is another closer partner of Samsung’s. It was one of two carriers to play host to the original Galaxy Note and its carried both the Galaxy Note 2 and Galaxy Note 3. There’ simply no chance that Ma Bell will pass on the Galaxy Note 4, a device that should become one of the top Android smartphones on the market.

Consumers in the United States should not expect AT&T stores to open early to accommodate the crowds that likely won’t exist during the Galaxy Note 4’s release. Finally, look for the AT&T Galaxy Note 4 to be sold through Samsung’s website, AT&T stores and through tons of different retailers including Best Buy and RadioShack.

We expect similar from Sprint. Like AT&T, it should feature some sort of splash page that allows prospective customers to input their information to stay up to date on pre-orders and the release date. And like AT&T, we expect Sprint to keep its store hours normal for the Galaxy Note 4 release date. We also expect the Sprint Galaxy Note 4 to be available in tons of retail spaces.

Look for Sprint to push its new unlimited data plans. The carrier recently killed off its “Framily” program but it added more data in an attempt to compete with the likes of T-Mobile. Sprint is still the only major carrier that offers true, pure unlimited data and we expect it to be aggressive as the company tries to gain ground on the competition. 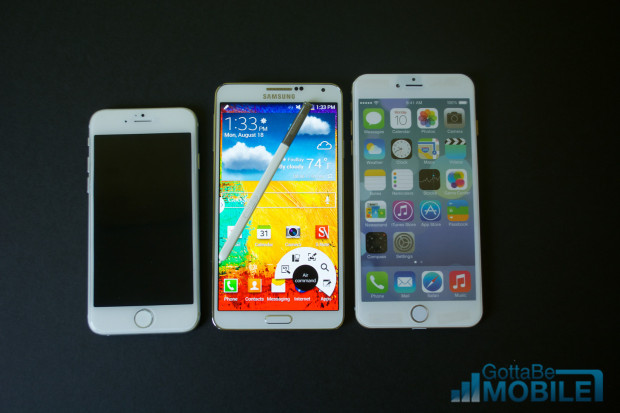 The T-Mobile iPhone 6 will almost certainly arrive on the first day of availability. T-Mobile has been extremely aggressive throughout 2014 so there’s no reason to think that it will be slowing down.

We should see the carrier offer a sign up page, it always does, and we would not be surprised if the carrier offered some kind of incentive, be it a price cut for those that order early or something else. Expect T-Mobile stores to keep regular hours.

As for the particulars, look for stores to keep regular hours and look for the U.S. Cellular model’s availability to be limited to certain areas of the country. It might be growing but the carrier is still a regional carrier and thus, its devices aren’t available everywhere.

The Verizon Galaxy Note 4 should be one of the more popular models and we should see the Verizon release mirror AT&T’s. Sign up page, stores that don’t open early, and availability at a number of retailers.

We also wouldn’t expect Verizon to be months behind the curve when it comes to the release date. The carrier learned its lesson after the debacles with the HTC One M7 and Galaxy S4 and its releases this year have been speedy.

We’re not expecting the Galaxy Note 4 to hit any smaller carriers.