With a Samsung Galaxy Note 4 release date getting closer, consumers are starting to weigh their current device and top devices against Samsung’s next flagship smartphone. In this Galaxy Note 4 vs Galaxy Note 3 comparison, we take a look at the key differences buyers and upgraders should be aware of as we march deeper into the fall.

The Samsung Galaxy Note 4 may not come with a curved display but it’s going to be the mainstream Galaxy Note option this fall. Like the Galaxy Note Edge, the Galaxy Note 4 comes with an array of powerful hardware specs, software features, and a release on a number of well known carriers in the United States and elsewhere.

With a release date on the horizon, buyers around the world are starting to weigh the Galaxy Note 4 against the competition which includes the cheaper Samsung Galaxy Note 3 from last year.

If you are weighing the Galaxy Note 4 specs against the Galaxy Note 3 specs, there is one key feature that we think you need to be taking a very close look at. The first are the differences between the two S Pens. The S Pen is a key component for the Galaxy Note 4 and there are some key changes that Samsung made to its performance.

Samsung’s made some significant improvements to this year’s S Pen including increased sensitivity to make the note taking experience on the Galaxy Note 4 feel more like writing on paper. More sensitivity also leads to better looking text from handwriting. These improvements are not found on the Galaxy Note 3 and they probably will never find their way over to the aging former flagship.

Samsung’s also made some significant improvements to the S Pen’s applications including, Air Command, S Note and Voice Memo, and more. These improvements are going to be a core part of the Galaxy Note 4 experience and they’re features that may not arrive on the Galaxy Note 3 in the future. It’s not clear.

What you’re going to need to decide is if these improvements are worth the extra price tag or the upgrade. These are going to be some of the Galaxy Note 4’s most notable differences and with the S Pen experience vital to the Galaxy Note series in general, these are the features that we think you’ll want to focus in on before you make a purchase or decide to upgrade.

That’s not to say that the S Pen is the only feature that prospective Galaxy Note 4 buyers need to know about in the build up to the Note 4’s release.

Samsung typically supports smartphones for two years before kicking them to the curb. That could change with the improvements to hardware though we suspect that older devices will still lose out on updates and features. The Galaxy Note 3 is older than the Galaxy Note 4 and that’s noteworthy for ugpraders and buyers. 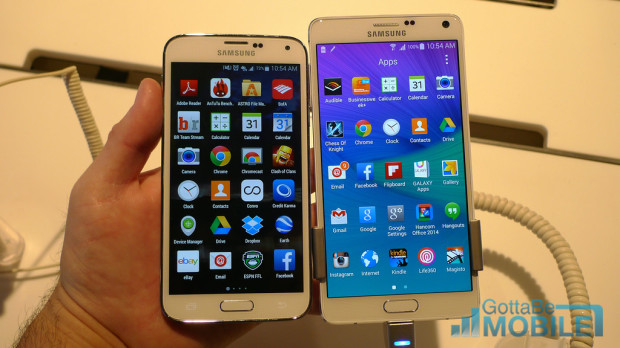 There is no guarantee the Galaxy Note 3 will get all of the S Pen’s new features or any of the new TouchWiz features that are coming with the Note 4 including changes to Multi-Window View. Older devices tend to get bits and pieces of Samsung’s new software but never the entire change log. Samsung needs to be able to sell its new products and software is a big part of that.

While it might be tempting to pull the trigger on one of these smartphones from the comfort of your own home, we advise you to wait until you can go hands on with the Galaxy Note 4. You can’t go hands-on right now but that’s going to change in a few short weeks as Samsung pushes the Galaxy Note 4 onto shelves around the world.

The Galaxy Note 4 release date in the U.S. is confirmed for October 17th. At that time, stores should have both devices stocked and demo units available. If you’re able, go down to your local retailer and go hands on. This will allow you to test and compare the cameras, go hands on with the S Pen, absorb the difference in display quality (Note 3 features Full HD, the Note 4 features Quad HD), and decide which design feels more comfortable in one hand.

Feeling comfortable with you smartphone is absolutely critical and you won’t be able to make that decision from behind a computer screen. Skip the Galaxy Note 4 pre-orders and go hands on in three weeks. You can thank us later.

Prepare to shell out for the Galaxy Note 4. While we had to wait a few weeks, we now know that Samsung’s Galaxy Note 4 will come with a familiar price. AT&T and Verizon will charge $299.99 for the 32GB Galaxy Note 4. Sprint dropped its price down to $299, it was originally at $350. T-Mobile charges $0 down for the time being while U.S. Cellular has yet to reveal its price. We expect its price to fall in line with the others though.

If you can wait a few weeks, you’ll probably run into a few Galaxy Note 4 deals. Just another reason why you shouldn’t pre-order if you’re still trying to decide if you want to make the Galaxy Note 4 your next phone or not.