The image was unearthed by Twitter user ClasificateArg, courtesy of SamMobile, and it shows a device that is depicted as the Samsung Galaxy Note 8.0. It appears that the image is part of a larger document but fortunately, all of the good stuff is included. We see a photo of what apparently is the front of the Galaxy Note 8.0 and we also get a glimpse at the back of the mid-ranged slate. 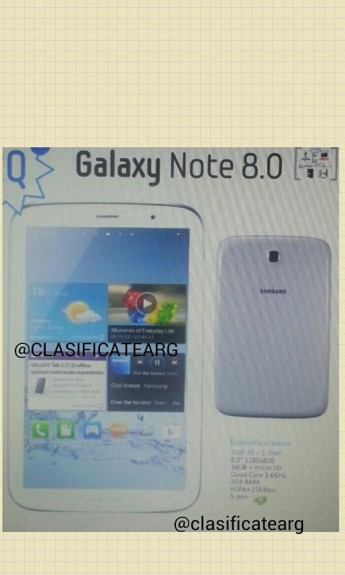 Already, we think we know its specifications. The Galaxy Note 8.0 is said to be arriving with an 8-inch display with 1280 x 800 resolution, a quad-core processor clocked at 1.6GHz, a 5MP camera in the rear, an S-Pen stylus – same as the other Note products, HSPA+ connectivity, and a massive battery paired with Android 4.2 Jelly Bean, Google’s latest.

If the price is right, this could certainly be a viable alternative to the other big name tablet at this size, Apple’s iPad mini, which boasts a screen that measures 7.9-inches in size.

No official pricing or release date is known for the Galaxy Note 8.0, but we imagine that Samsung will more than likely release this device shortly after it makes its official arrival next month.