According to Internet gadget seller Clove, the Galaxy Note, which first debuted earlier this month at the IFA conference in Germany, is expected to land in the UK in late November for £500 + VAT. Clove says that it will announce exact pricing and release date closer to the launch. 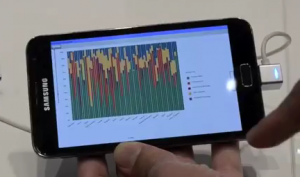 The Galaxy Note is an expensive device that will merge phone and tablet functionality into a compact 5.3-inch form factor and will most likely appease those who have used the 5-inch Dell Streak in the past. While the 5-inch display will make the device portable, the Galaxy Note will have a very high resolution of 1280 X 800–which matches the display resolution on the company’s 10-inch Galaxy Tab 10.1–Super AMOLED Plus display. Despite the high resolution, the Galaxy Note will feature Android Gingerbread rather than the tablet-oriented Honeycomb OS, probably to keep phone voice calling functionality intact, alongside a dual-core 1.4 GHz CPU, rear 8-megapixel camera, and front-facing camera.