We’ve heard rumblings of a successor to the Galaxy Note, which was only recently released in the U.S. for carrier AT&T’s 4G LTE network, last month and now the device, which bears the model name GT-8000, is appearing again with Bluetooth certification from the Bluetooth Special Interest Group. The GT-N8000 had received WiFi certification last month.

According to the Bluetooth SIG, the device is categorized as a mobile tablet. 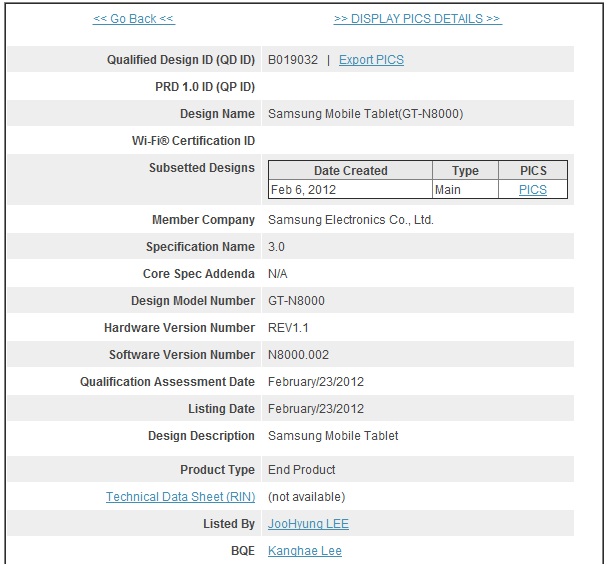 As the original Galaxy Note was launched late last year, it’s unlikely that Samsung would announce a successor so soon after at Mobile World Congress later this month, but with plans from Samsung on a follow-up, it looks like there has been a lot of interest in the form factor. The Galaxy Note is a polarizing device that straddles the smartphone and tablet categories equally and is considered by many as a large phone and others as a small tablet that can handle voice calls. The device will be upgradeable to Android 4.0 Ice Cream Sandwich, though neither AT&T nor Samsung has given a specific date for the rollout.

The most unique thing about the Galaxy Note is that it comes with a digitizer pen, which Samsung is branding as the S-Pen, and that may be targeted to casual note-takers, business users, and artists. The digitizing pen is powered by Wacom technology and is built in addition to the capacitive touchscreen display.

Additional details about the GT-N8000 is currently not available at this time. Perhaps the next version will utilize Samsung’s quad-core Exynos processors. The international GSM version of the Galaxy Note currently uses a dual-core Exynos implementation though the U.S. LTE edition utilizes Qualcomm’s dual-core Snapdragon CPU for better network compatibility with AT&T.

Additionally, there is also interest among Verizon customers with the Galaxy Note as a recent petition was started to ask the carrier to offer the Note on its 4G LTE network. Verizon had previously been rumored to carry a Note variant known as the Journal.

In the past, Samsung is also rumored to expand the Note lineup to additional screen sizes, perhaps reserving the Galaxy Tab moniker to models without the active digitizing pen and using the Galaxy Note branding to denote models that support the S-Pen.