Over the last several months, Samsung has targeted Apple’s iPhone and its legions of fans. The ad campaign culminated in a huge Super Bowl ad, the first for Samsung’s mobile division, that featured everything from Brian Urlacher of the Chicago Bears to a guy getting shot out of a cannon. And let’s not forget the hipster iPhone users. Anyway, we thought that Samsung might be done attacking Apple after that.

Samsung has released a new ad that pits the company’s new Samsung Galaxy Note, the massive 5.3-inch device the company marketed in the Super Bowl ad, against the mighty iPhone in a street challenge.

At the beginning of the ad, we’re told that the guy with the Samsung Galaxy Note has only had the thing for a couple of hours. And then, the battle begins with the gentleman on the left toting the Note and the lady on the right using Apple’s iPhone.

The contestants are then asked to create a special message for a loved one for their birthday. The woman holding the iPhone can only sit there in shear amazement as the guy, who has only used the Galaxy Note for a few hours, comes up with an ingenious idea.

He uses the Galaxy Note’s S-Pen,to cut out his to put on his little cousin’s favorite basketball player’s body. 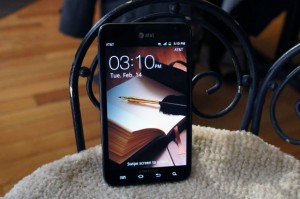 The lady with the iPhone’s rebuttal is, of course, to just write a quick little note using smiley faces.

The next challenge has the contestants trying to send a contact easy directions to get from point a to point b. And while the Galaxy Note owner is able to draw directly on the map and screen shot it to send out to a friend, the iPhone user stares on in bewilderment.

Then, the Galaxy Note user shows off the device’s ability to edit PowerPoint presentations, right from the Note’s screen. Again, the lady with the iPhone has absolutely no idea what to do.

And then there is some talk about how the iPhone user might use her upgrade to get the Galaxy Note because it does all of these things that the iPhone can’t do.

And while I’ve loved Samsung commercials in the past, this one absolutely drove me up a wall. Clearly, this guy did not just pick up this device a few hours ago. I’m also pretty sure that a slightly above average iPhone user could have figured out how to contend in all three contests.

I’m not a marketing guru, but here’s some advice for Sammy:

Stop insulting the intelligence of consumers.

Focus on marketing the benefits your product rather then bashing Apple and its fans. I, along with many others, would have rather seen a commercial touting the benefits of a 5.3-inch smartphone with a stylus.

The Galaxy Note is a great product.

It would have been nice to see a great marketing push behind it.