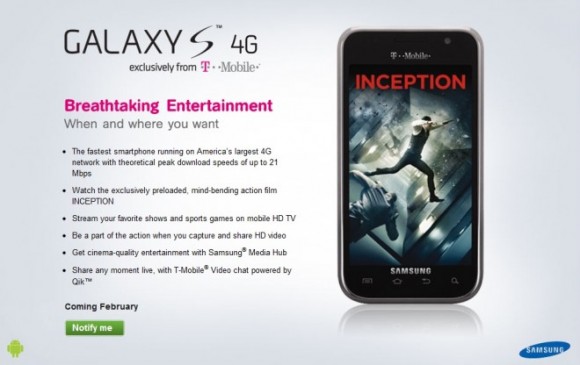 It looks like T-Mobile USA, the nation’s fourth largest wireless carrier, has made the Vibrant Galaxy S successor–the Galaxy S 4G–official at Mobile World Congress. The evolutionary upgrade to the Galaxy S lineup will support the carrier’s faster 21 Mbps HSPA+ network that it is promoting as a 4G standard. In a Twitter post, T-Mobile is saying that the smartphone will land on February 23rd for $149.99 on a two-year service agreement.

Like the original Galaxy S, the Galaxy S 4G will retain the same hardware form factor. However, new to the handset is support for 4G speeds, a front-facing camera for video calls, and a new back battery cover, which blog IntoMobile is describing as “matted and monochromatic.” Unfortunately, for those who are awaiting an Android 2.3 Gingerbread OS, the Galaxy S 4G will only ship with Android 2.2 Froyo and Samsung’s proprietary TouchWiz user interface overlay; the Vibrant shipped with Android 2.1. With Android 2.2, the Galaxy S 4G will be able to navigate Flash-powered sites on the device’s 4-inch Super AMOLED screen, which unfortunately means that Samsung didn’t opt to put the newer Super AMOLED Plus display that’s found on the Samsung Infuse 4G and the newer Samsung Galaxy S II smartphone.

It is also said that the introductory $149.99 price point will jump back up to $199.99 on a two-year contract after the promotion period.