In a rare move, the Galaxy S II HD, which was announced for AT&T’s 4G LTE network at CES 2012 as the Galaxy S II Skyrocket HD, was first announced for the U.S. market before taking roots in Asia or Europe. As phone releases go, manufacturers usually release phones abroad first before bringing them to the States, but the Galaxy S II is one of few exceptions to that rule and the device may also be headed to the UK following its U.S. introduction.

Smartphone blog MoDaCo discovered the new device through an ad that was seen on MobiCity. Samsung has not made any formal announcements for the UK release at this time and full specs, pricing, and release date are still yet to be known about the phone. The ad does boast a ‘bigger, better, newer version of the popular S II,’ with a ‘higher resolution screen and more battery power.’ 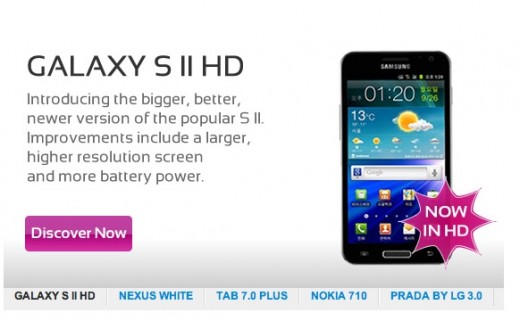 For its part, the Galaxy S II Skyrocket HD boasts the same 4.65-inch Super AMOLED HD display as the Galaxy Nexus, but without the curved glass, when it was announced for AT&T.