It looks like Samsung’s promise of launching its third-generation Android flagship Galaxy S III smartphone this summer in the U.S. market is getting a bit closer as AT&T and T-Mobile variants of the phone are now registered. Though Samsung still has not confirmed what carriers the Galaxy S III will be available with in the U.S., the phones are now registered and approved with the Bluetooth regulatory agency Bluetooth Special Interest Group (SIG). The Galaxy S III for AT&T appears under the model number SGH-I747M while the T-Mobile USA version appears under the model number SGH-T999V.

Details released by the Bluetooth SIG were scarce, except to mention that these Android handsets will be approved for the Bluetooth 4.0 specification. Unwired View’s report shows that generic placeholders for the international edition of the carbon blue version of the Galaxy S III were found for both model listings. 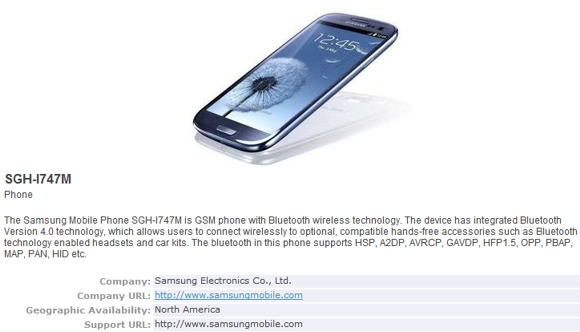 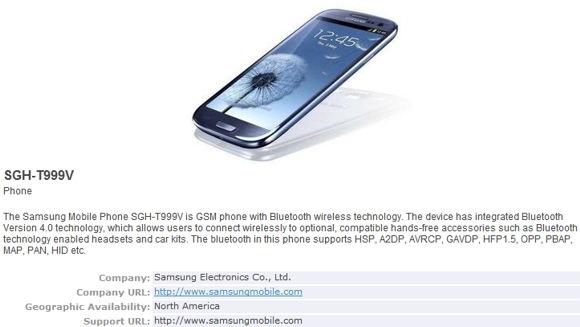 At this point, it’s unclear if the U.S. variants of the Galaxy S III will keep the same overall design as the international variant. In the past, Samsung had made minor cosmetic changes that affect the design and functionality of the Galaxy S I and Galaxy S II smartphones for the U.S. market. For example, the prior two generations of Galaxy flagships eschewed the home button found on the international variant in favor of a row of four capacitive touch Android navigation buttons, which includes the search button that’s so often missing on international devices.

Given Android has migrated to a different design for Ice Cream Sandwich to now encompass just home, back, and multitasking keys for the Android navigation buttons, with the menu button and the search button brought onto the display, chances are the Galaxy S III may utilize the same design and form factor in the U.S. as it does internationally.

Additionally, the AT&T edition of the Galaxy S III will likely include 4G LTE networking capabilities and may eschew the quad-core Samsung Exynos processor for Qualcomm’s Snapdragon S4 chip for better network compatibility. It’s unclear if these models will have the same 2 GB RAM that was found on the recent Japanese version.