A new render for the Samsung Galaxy S III Android smartphone may have emerged in a Samsung press invitation that shows off the bottom half of the device. According to the invitation, Samsung is set to unveil the Galaxy S III on May 22nd in London, which means that the Android manufacturer will meet its promised first half of 2012 announcement timeline after having pulled the announcement from Mobile World Congress earlier this year. 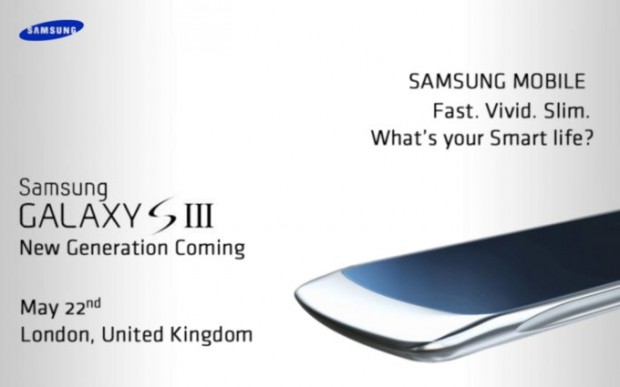 The media invitation posted on Phandroid definitely mentions the ‘Galaxy S III’ name and says that ‘new generation coming.’ The picture shows a device with a very sleek look that tapers to a near flattened bottom edge, suggesting that the traditional bottom rear hump of past Galaxy S series smartphone design is now gone, leading to a more polished look.

The design also shows an exposed chrome finish around the edges, but it’s unclear if that piece will be polished metal like on the competing HTC EVO 4G LTE smartphone that was recently unveiled.

Whatever the case, it looks like Samsung is transitioning its smartphone design if the render on the leaked media invitation is to be believed. The screen on the smartphone also looks to be slightly curved. The smartphone is believed to be sporting a new Super AMOLED Plus display with a 720p HD resolution, unlike the Galaxy Nexus, which made due with an HD Super AMOLED display. Moving to the plus moniker means a sharper screen that eliminates the use of the PenTile sub-pixel arrangement, leading to crisper text and better image rendering.