For Galaxy S3 and Galaxy Note 2 owners, a new Android update has been a long time coming. The Samsung Galaxy S3 hasn’t received a major Android update since Android 4.1 Jelly Bean started rolling out back in September though Samsung did roll out a Premium Suite update that gave owners access to features like Multi-Window View. For Galaxy Note 2 owners, the situation has been much worse.

Back in September of last year, the Galaxy Note 2 rolled out with Android 4.1 Jelly Bean on board, one of the first smartphones to do so. However, this is where the device has remained since its arrival last year and the device owners did not receive an incremental Premium Suite update to keep them happy during the long wait.

Rumors suggested that the devices would be skipping Android 4.2 (boo!) in favor of Android 4.3 (hurray!) and that the updates would be out sometime late in the year, possibly as late as November (boo!). As it turns out, this six month old information may have been dead on.

Over the past few weeks, we’ve seen some major developments with the Galaxy S3 and Galaxy Note 2 Android 4.3 updates and it appears that they will be getting their upgrades sometime soon. Well, at least most of the variants will.

Here, we breakdown everything that there is to know about the Samsung Galaxy S3 and Galaxy Note 2 Android 4.3 updates, ahead of their release.

Samsung Galaxy S3 users are anxious about their next big Android update and we’re not surprised. It has been a long time since the former flagship has received a major Android update with Android 4.1 representing the last big release from Google. However, Galaxy S3 owners shouldn’t have to wait long for the software to arrive.

Now, it’s clear that Android 4.3 will be that update as it will bring Bluetooth LE support to the Galaxy S3, something that makes sense as the Galaxy Gear is a Bluetooth powered device. There will be other features on board as well.

We fully expect there to be Samsung Galaxy S4 TouchWiz features on board as well. An early Android 4.2 Galaxy S3 leak pointed to a new lockscreen, the new camera features, new S-Voice, and new Voice controls. We doubt Samsung killed those off in the jump to Android 4.3 Jelly Bean.

So now that we know it’s coming and that it will have big time features, the big question is when. Well, all signs are pointing to a release starting very soon. Signs have pointed to November and Samsung itself says that it will be starting Galaxy Gear support updates by the end of October. At this point, we don’t expect the update to arrive outside of November.

Of course, there are some caveats that Galaxy S3 owners need to know about. One, Australian carrier Telstra plans to roll out Android 4.2.2 before it rolls out Android 4.3. It’s unclear if it will be the only carrier to do so. And two, Galaxy S3 users in the United States should not expect right on the initial release date. We spotted the AT&T Galaxy S3 Android 4.3 update awhile back but that doesn’t mean it’ll be out in the near future. What it’s looking like though is that the Galaxy S3 Android 4.3 update will be out in November in the United States, far sooner than expected. 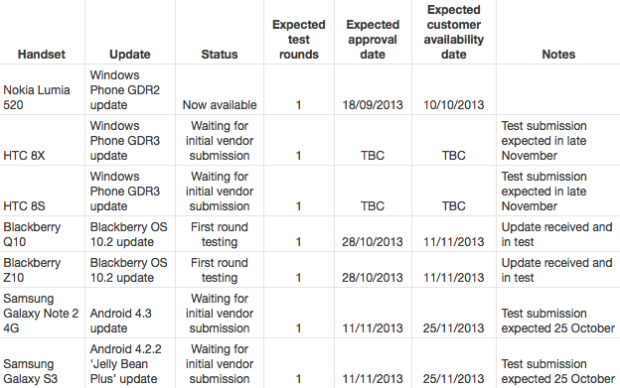 Samsung confirmed the Galaxy Note 2 Android 4.3 update, saying that it too would have many features on board, but the company did not say when owners can expect it. Rumors have pointed to November or December all along and Telstra is pointing to a release in late November, a sign that the unbranded, unlocked software could roll out a few weeks before that. At this point, November is looking good though no specific date is known.

The Galaxy Note 2 Android 4.3 update has leaked but the software is merely a test build and should be avoided by everyone but well traveled tinkerers who want to get their hands on it early. Signs also now point to a release in the U.S. in November, something that should excite users.

These two updates may not be the final updates for the Galaxy S3 and Galaxy Note 2. Rumor has it, Android 4.4 KitKat is in the works for both of these former flagships though we have no idea when the update might roll out.

Android 4.4 KitKat is expected to touch down in just a few days and given that Android 4.3 isn’t even out, we don’t expect anything to roll out until 2014. And for U.S. owners, that likely means deep 2014.