One of the rumored features of both the Samsung Galaxy S4 and the Samsung Galaxy Note 3, the new Exynos 5 Octa quad-core processor, has been shown off in an official video touting the benefits of the processor which include increased performance and improved battery life.

At CES 2013, Samsung not only debuted a flexible smartphone prototype, but the company also introduced a powerful new processor, part of its Exynos line, called the Exynos 5 Octa. The Exynos 5 Octa is a quad-core processor that utilizes eight cores including four Cortex-A15 chips and four Cortex-A7 processors. 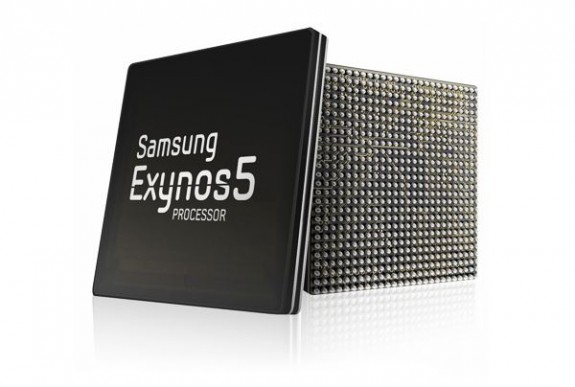 Samsung has teased the Exynos 5 Octa processor on video, a processor that could wind up in the Galaxy S4.

The processor, while possessing eight cores, only uses four at a time. Samsung has said that High performance will be handled by the more powerful Cortex A15 cores while the low-level usage will be tackled by the Cortex A7. Samsung also touted the increased battery life found in device using the Exynos 5 Octa.

According to Samsung, the Exynos 5 Octa will us 70-percent less power than the standard quad-core Cortex A15 processor and it will also supply better battery life than its own Exynos 5 processor, the processor that is found in the company’s Nexus 10 Android tablet.

Samsung has been teasing the processor since its launch, first showing it off in a photo and now, more recently, in a video showcasing not only the benefits of the Exynos 5 Octa but showing exactly how it works.

Alleged benchmarks have suggested that the international variant of the Galaxy S4 may have the Exynos 5 Octa inside when it arrives. Benchmarks also suggest that carrier variants may end up running Qualcomm’s SoC though none of this is confirmed.

The Samsung Galaxy S4 is also rumored to have a large 1080p display, possibly 4.99-inches in size, a 13MP camera, Android 4.2 Jelly Bean, and a launch date on either March 15th or March 22nd and a release date in April.

Whether or not the Exynos 5 Octa will be on board remains to be seen.